Following a surprising win for Mad Max in Malaysia on sunday, Hamilton could only improve his lead over Seb by 6 points, now with a 34 point lead many would have to believe that this should be sufficient enough for Hamilton to win the championship, but with Malaysia showing that Red Bull and Ferrari were genuinely quicker then Merc, some question marks are now being raised over the current pace of the Merc's.

Have the last 2 races just been a track related blip pace wise for Merc or will this be the norm until the end of the season?

Without doubt another huge question mark is whether Seb will have to change his gearbox following his post-race incident with Stroll, for the sake of Seb's championship hopes he can ill afford a 5 place penalty here as Suzuka is a lot harder to pass then at Malaysia.

Either way I'm sure we'll get the answer to that question sooner rather then later.

(driver tyre choice as shown below) Lastly expect to see fans like this in the grandstands over the weekend.:lol: Japanese F1 fans I salute you.
Reactions: Minimariner and xMinxG

Again you managed to be faster than me :banghead:

You forgot that there are always crazy Kimi fans there 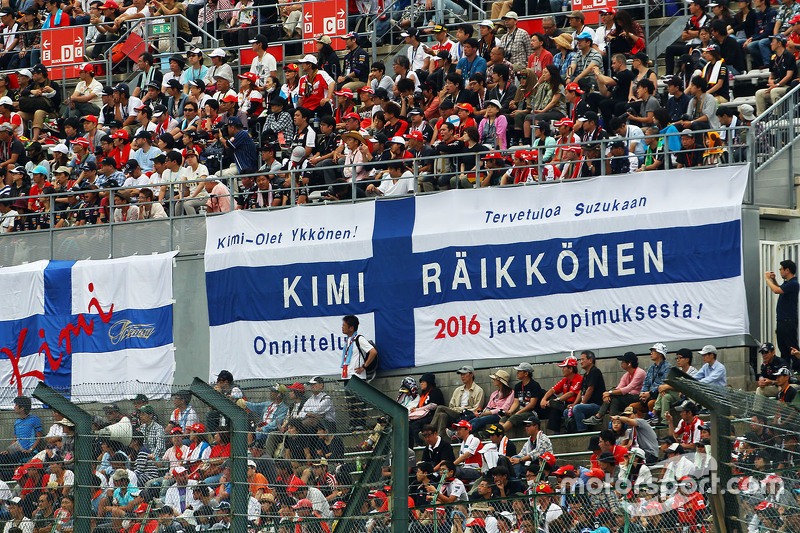 That huge Finnish flag is always there, on the main stand across the main straight
Reactions: Wobbuffet and xMinxG

WOOHOO! Finally I've been waiting for this race for ages. finally! My plan is to make initial d or Japanese culture references in every comment. so bring on the SEGA Japanese Formula D Kansai Dorifto GP 2017.
Starring
Takumi Alonso- Rubbish car(AE86) great driver
Keisuke Bottas- always in the shadows(*of Lewey Lewey and Blue Flagtel)
Bunta Verstappen- Dorifto god(Smoking whilst drifting)
Shinji $troll- Kid in a mans world
Ryosuke Riccardo-always winning through someway or another (although you could have Ryosuke Prost-Car encyclopaedia if you want)
and of course
DK(NOT DONKEY KONG THE OTHER DK)

anyone else know initial d? or does everyone have zero idea of what it is?

Nani? Kansai Dorifto?
That's the proper way to say it.

Vettel fans wishing kimi to take out lewis. And I thought lewey lewey fans were bad...

Brownskii....did you make new profiles on youtube to comment on you're hope that lewis gets taken out. But watch as he drifts and kimi crashes! And the crowd would all cry kansai dorifto! *told you I would do this all of this threads lifespan

@Henry Gordan to be honest it doesn't surprise me Raikkonen has a following in Japan, though the Japanese fans seemed to be more renowned for there McLaren drs functional hats/helmets then there driver banners of late.

Anyway the main news to come out of yesterday was that Ferrari have given Seb's gearbox the all clear for use - for now, though they will run it in FP3 and make a final decision whether to use it for qualy and the race, so we will just have to wait and see.:angelic:

Brownskii....did you make new profiles on youtube to comment on you're hope that lewis gets taken out. But watch as he drifts and kimi crashes! And the crowd would all cry kansai dorifto! *told you I would do this all of this threads lifespan
Click to expand...

Can you post this again in English please? I don't understand what you're trying to say

Just leaving this here as last week rumbles on....

Looks like it going to be a mixed bag for the FP sessions, no surprise FP1 will be busy as its currently dry as theres rain expected for FP2.

Surprising, from the view behind the pair it looked like Stroll didn't steer at all but clearly this isn't the case, but I'm still not blaming either driver as it was a silly crash.

You know, in all honesty it would have been kinder if he'd died as a result, obviously if he had to even have had the accident at all. These stories surface from time to time and I don't see that anyone benefits; one of these days there'll be an 'insider' leak all over the press about the reality. And it will be grim and unnecessary.

The practice sessions yesterday didn't give us to much of an idea of the pace of the teams, but if you did take FP1 at face value then it would likely be a 3 horse race though I suspect Ferrari and Merc will have a little bit of time in hand on Red Bull when it really matters in qualy & race.

FP3 will be interesting to watch providing its dry also we'll find out if Seb's gearbox is good to go for the rest of the weekend, and speaking of gearboxes Bottas has had to change his and will have a 5 place grid pen for qualy.

lol at anyone who said Mercedes would struggle. That car is ridiculous how OP it is...

Low temperatures bring out the best in that Mercedes car. Hamilton was untouchable. He'll win quite comfortably tomorrow. As for Kimi, another weekend with bad luck; albeit his crash was his own fault. There's no way the car would have been set up properly for quali. In terms of the championship, Hamilton will have it won with a race to spare

Curses. went with vettel to win. @DON SILVA remember Malaysia. I still think Mercedes haven't got enough out of the car and strategy wise.

xMinxG said:
Curses. went with vettel to win. @DON SILVA remember Malaysia. I still think Mercedes haven't got enough out of the car and strategy wise.
Click to expand...

This is completely different to Malaysia. Ferrari were clearly quicker there. Hamilton scraped pole by half a tenth from Kimi who's consistently slower than Vettel. Here it's a different story. The Mercedes is working very well
Reactions: Wobbuffet
You must log in or register to reply here.
Share:
Facebook Twitter Reddit Pinterest Tumblr WhatsApp Email Link
Top Bottom