Below you can find an overview of the league tiers and driver placements for Season 12 of the AOR F1 Leagues on the PC platform!

When deciding the leagues we have tried to follow the guidelines stated in the league information thread (as quoted below), meaning the time trial times have played the biggest role, with performances in the evaluation races and past league experience coming into play in some cases (particularly to place drivers on the edge between two tiers).

When setting up the leagues for a new season, we always aim to make the leagues as close and competitive as possible, by placing drivers where they best fit into the league structure in relation to their pace.

With this being a new season on a new game, both returning and new drivers will be placed in leagues based on the times submitted in the official time trial event, as well as race pace data from the mandatory pre-season evaluation races (this only applies for pre-season sign-ups). Experience from previous season(s) may also be taken into consideration to some extent, but less so than usual.

Each league will generally allow a full grid of 22 drivers (plus reserves), although Tier 1 leagues may be limited to 20 drivers in order to accomodate live broadcasters, if this can be arranged.
Click to expand...

League Placements:
Below you can see which league tier each driver has been placed into. Drivers are ordered within each league based on priority in the car selection order (see here for more info). 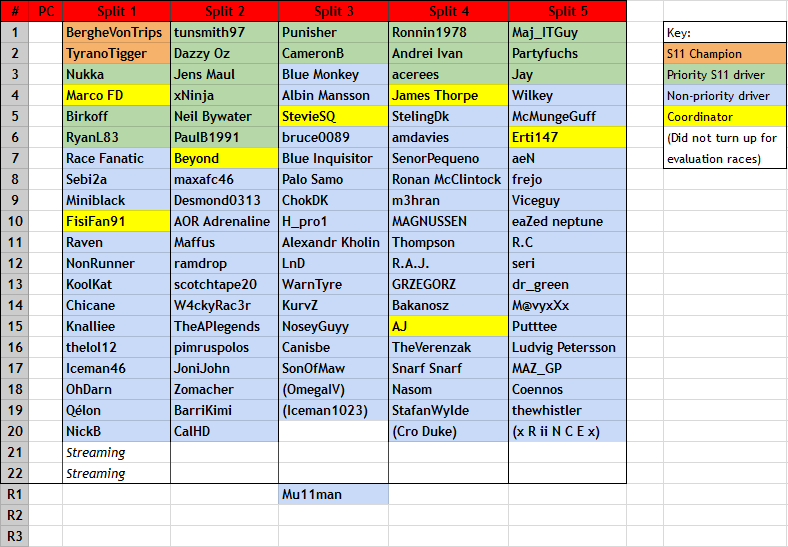 Time Trial Leaderboard:
For anyone who is interested, below you can see the full results from the Time Trial Event, with all drivers sorted from fastest to slowest based on the combined time from all 3 tracks.

Note: Please remember that while the time trials were our main basis for determining the leagues, it was not the only consideration, hence why some drivers' position on the leaderboard may not fully reflect their league placement. Good luck in the season opener on Sunday, and remember to keep it clean!
Last edited: Jun 26, 2017
Reactions: Birkoff, H_pro1, Cannacoennos and 7 others

Thank you for the hard work guys @FisiFan91 and others involved!
Reactions: Birkoff, H_pro1, Former user1 and 6 others

AOR Adrenaline said:
Thank you for the hard work guys @FisiFan91 and others involved!
Click to expand...

You guys are amazing. Glad I signed up! Thanks for your hard work!

SonOfMaw said:
So where did I end up?...

Nice work on the splits guys! Really appreciate it!

Thanks for the hard work!
Really appreciate all the time and effort running this for us all.
Reactions: FisiFan91

Nooooo, just realized there won't be any banter between Beyond and myself via TS anymore.
Reactions: AOR Adrenaline

xNinja said:
Also, i took part in S11 so i should have priority
Click to expand...

Wuuuut I can't see you in either of the standings ldman:

FisiFan91 said:
Wuuuut I can't see you in any of the standings ldman:
Click to expand...

PS4 under the name 'INSAN3LIK3HAWIZ'

I guess a name and console change doesn't help recognise that

I guess a name and console change doesn't help recognise that
Click to expand...

No way I could know and/or remember that tbh - I'm starting to get old you know :dead:

I'll get that amended
Reactions: xNinja

BergheVonTrips said:
Nooooo, just realized there won't be any banter between Beyond and myself via TS anymore.
Click to expand...

I will always be there for the banter before and after the race Berg it will never end!
Reactions: BergheVonTrips

WOW this must have been really hard for you guys!Incredible job thank you all for making this all possible!
Reactions: AOR Adrenaline and FisiFan91

@FisiFan91 When your going to info us that wasnt fast enought to get into initial league placements?
Reactions: yoan97222

Laakso said:
@FisiFan91 When your going to info us that wasnt fast enought to get into initial league placements?
Click to expand...

Will try to get back to all late sign-ups tonight (although possibly tomorrow since Friday is super busy for me these days)!
Reactions: yoan97222 and Laakso