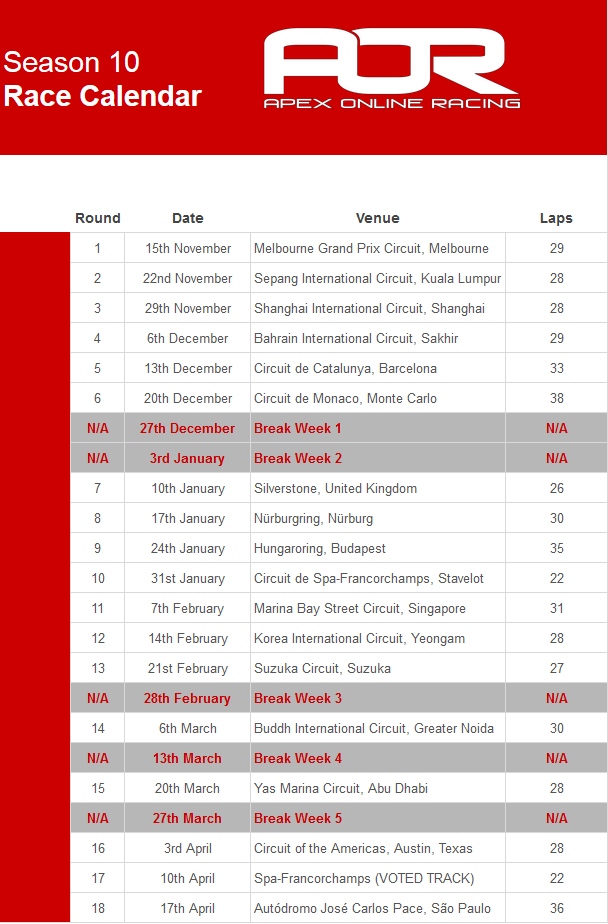 The calendar graphic has been updated to match the season starting a week late, Canada being removed, and the late-season break being reduced from two weeks to one week, meaning the season will finish off a week earlier than originally scheduled (on 3rd April - the night of the real life Bahrain GP!).

Remember that we're still on a break for this Sunday, so see you all back on track for Silverstone on the 10th!

Alright guys, we have decided to give Monza a skip for the same reasons as Canada (deemed as overly corner cut abuse prone). This calendar in the OP has been updated to reflect this.

A suggestion has however come up to maybe do a driver vote to bring one of the previous tracks back for a second time later in the season, in order to keep the calendar at 18 rounds as planned. I don't know how you guys would feel about that?

Just from the onlookers viewpoint.... I would make them all go round Spa again, that race was the best!

Personally I think we should bring back a track. Maybe even two as India is just as bad for cutting and extending as Italy and Canada is, makes no sense if we remove Canada, Italy and not India in my opinion. Just set up a poll for us to vote, easiest way to gather everyones opinion. Also as Brociek said maybe there should be a break week during easter.
Reactions: KBlock78, Pryde and Seiyariu

Leoobot said:
Also as Brociek said maybe there should be a break week during easter.
Click to expand...

Tbh if Easter is going to be a problem for people I think it'd be easier to just remove the current break week and end the season a week earlier (so before Easier), instead of having a break week before just the final race of the season? Although for that to work we'd have to keep the calendar at 17 rounds.

I can't remember Easter breaks being something we've done in the leagues in previous years, but obviously not an ideal date to end the season if it's possible several drivers will have to miss it.


Leoobot said:
Just set up a poll for us to vote, easiest way to gather everyones opinion.
Click to expand...

Anyone else have an opinion on whether it'd be a good thing to bring a circuit back to keep the number of rounds up? Maybe a poll would indeed be easier.
G

The calendar has been modified to move the next break week to 28th February after consulting with the drivers (as apparently several drivers would have had to miss that race). This means the Suzuka race will take place this week (21st February).

A break week has also been added for 27th March to avoid any potential problems of racing on Easter Sunday.

Since according to the vote, the majority of you guys would like to see a track be added in to take the round count back up to 18, this has also been included, and will be scheduled as the penultimate round of the season. The vote to determine which circuit this will be held on will be set up in the near future.

The season will still end with the Brazilian GP, now on 10th April.

Please check the full calendar in the OP to avoid any confusion. Hopefully this will be the final update to it!

Ok guys, I've decided that this week will be another break week for the league. This is because we apparently have 6 drivers who wouldn't be able to attend the race this Sunday (Limitless, Leoobot, Pryde, Foxeide, KBlock and Jason), meaning that we'd be having 7 drivers on the grid at most, which isn't really ideal for either the guys racing or the people watching. Matty also wouldn't be there to commentate as he (like Limitless) is going to the Codies community event to test and give feedback on F1 2016.

How this delay affects the calendar you can see in the OP. The next race is Abu Dhabi on 20th March.

On an additional note, based on the India race, it would seem that some of you could do with the extra time to practice track limits anyway. I know that the spectator mode can be a bit off with car positions at times, like we've seen examples of in the past, but there were A LOT of major cuts and extends that were visible throughout the stream last Sunday, and as you can see from the Youtube comments on the video, a lot of people are unhappy with what they saw. The video has also received a shitload of dislikes (more than my previous 60 videos combined...), although I'm not sure if this is all legit as it seems a bit excessive.

In hindsight I probably should have listened to Limitless' advice of scrapping India from the calendar as well, however I thought it would be best to keep on seeing as we had already dropped two tracks, and the fact that it was never dropped in previous seasons. But I hope that you guys take this seriously, and focus properly on staying within the white lines for the remaining races of the season. Remember that there are several hundred people watching the stream live, and more than thousand people watching the video(s) later, so how you guys drive will greatly affect the reputation of this league and AOR as a whole, and if we still want to be recognised as a league for clean racers, the situation with track limits needs to be a whole lot better than what was on display in the India race.

I would like you all to please give this post some kind of rating in order to let me know that you've read and understood the message. Cheers.

Just to confirm that - as per the driver poll - Spa-Francorchamps will be the circuit added in for the penultimate race of the season to take place on 10th April.

As it turns out, both Silverstone and Spa had 6 votes in the poll, however out of these, Silverstone had 2 votes from people who aren't driving in the league, while Spa had 1 - meaning Spa actually won 5-4 when only counting driver votes.

This week's race will obviously be the United States GP, and then the season will end off on 17th April with the Brazilian GP.