Yeah I had a blast this round.
Seeing the pace on Thursday of the yellow bunch had me somewhat worried as they all seemed rather quick.
I did make some minor changes to the set I had at that point which made it more neutrally balanced,
which allowed me to push it to the limit without it becoming too unpredictable.

Qualifying went ok, although I did mess up my 3rd lap a fair bit by ruining T1, but as it was good enough for p2 I really couldn't complain.
Had a good launch off the line and as @Ycoms seemed to struggle a bit on the opening lap I could take the lead in the back straight.
@Marcel Fassbender was catching me pretty quick and although I could keep him behind he had a good run out of the final corner and it seemed rather pointless to try and defend at that point.
I could keep within draft range and sat there till I the pitstops and as I made my pitstop and monitored the gap I wasn't that confident it was enough to come out in front, but surprisingly I did come out just ahead. But a little moment in T1 on the cold tires cost me as there was little I could to and saw Marcel pass me and couldn't really keep up.
From that moment on my concentration lapsed a bit and drove 2 scruffy laps which dropped me to over 4s behind.
Of course that was the moment Marcel had his little spin in T1 which brought me in contention again, but I was just so angry with my mistakes the laps before as without them I possibly could have taken the lead right there. In the end I just didn't get close enough to do anything so I had to settle for p2.

Qualifying for the sprint race I wasn't anything special, yet the lap was enough for p3. The start was a copy of the feature race and again I made a pass on the back straight to get p2 from @TheSmoun and with Christoph having a spin in T15 I was in the lead again. Again it was Marcel being bit quicker and catching me and with the previous race in mind I was much more determined to not give up the lead as easily as before, but yet I did lose it when defending in T1 and not having a good exit.
The next lap though I did get a good exit out of the hairpin and got a good run on on the back straight and I'm sure that Marcel regrets not defending the inside at that point. We did have some nice side by side racing for the next couple of corners but I did manage to take the lead.
For the remaining 3 laps I just spent looking in my mirrors to not get surprised anywhere and quite some tight and hairy moments later I did manage to just stay in front and take my second win of the season.

This has been by far my most enjoyable race of the season and I really have to thank Marcel for the close and fair racing in both races here at COTA and I hope we can have more of these battles in the remaining races.
Reactions: Connor Ryan, Patrick Kessler and Steffen Herrmann

McPhilen said:
I don't know if it's just my FOV, or if I sit higher in the F3 compared to the 2.0, but I could actually see the apexes of the corners which was my only real gripe with driving the track.
Click to expand...

Turns 1, 10 and 19 were completely blind for me. Am I doing something wrong?

N1kmido said:
Turns 1, 10 and 19 were completely blind for me. Am I doing something wrong?
Click to expand...

I definitely have my FOV set further back than most because I don't have to compensate for driving with the wheel to get a more natural position, so maybe that's it? Anytime I watch anyone streaming, especially if they are on just a single screen, they have their view way more zoomed in than I do.

@N1kmido for example, here is my view turning into the corner onto the long straight: 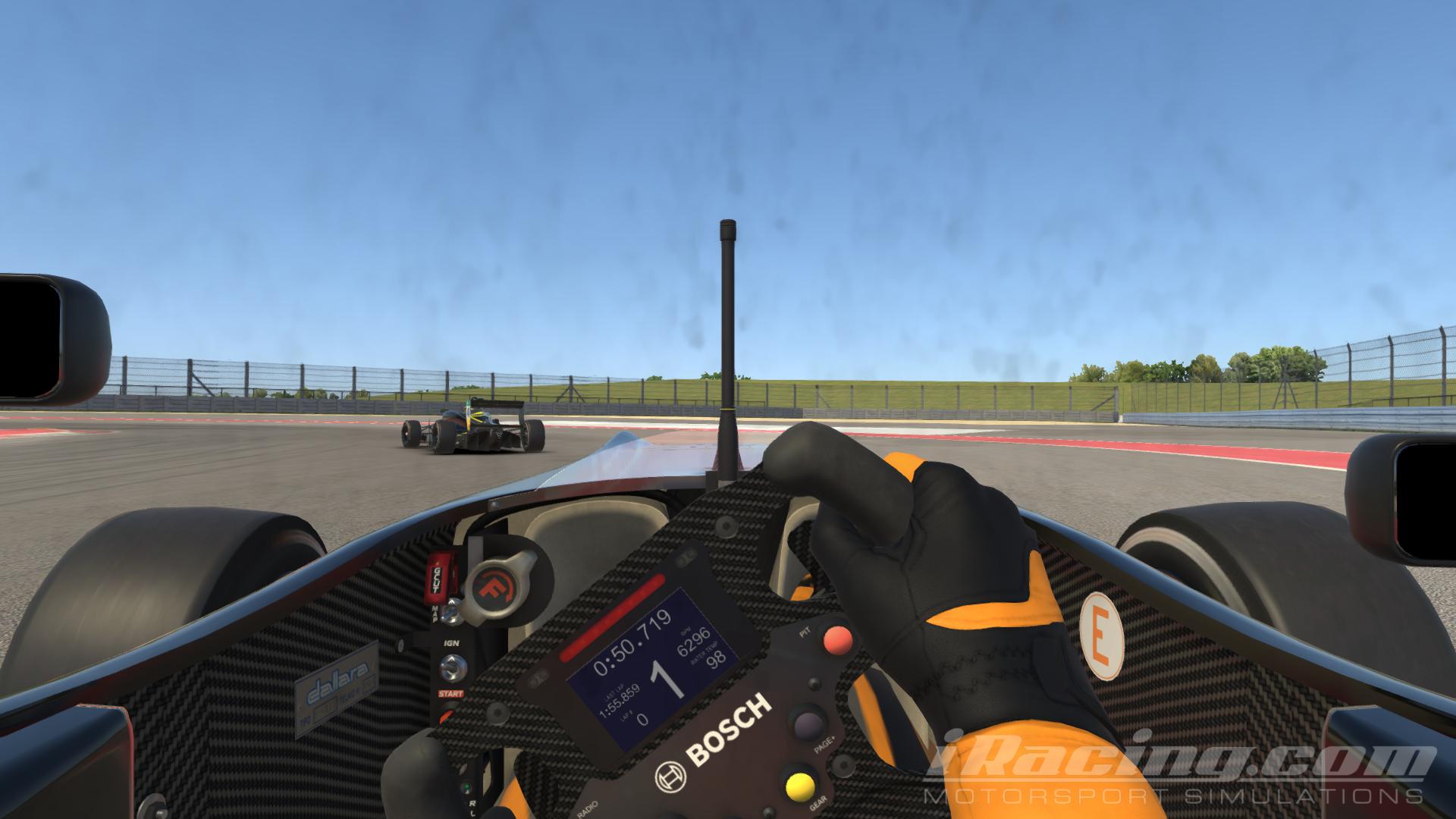 Thanks for that. Yeah I also drive with a more zoomed in vision. Can´t see the mirrors which is pretty annoying but any further back just feels very weird and uncomfortable, same if I go higher up. :/

I can see every apex due to VR. It has made me so consistent and not making mistakes anymore.

But my Friday was overall good. Consistent. P12 and P13 in Feature and Sprint. Still hanging on at P9 in the Championchip. Have done every race so far and finished it all so far. Only Monza went a little bit wrong. Overall one of my best season ever in AOR. My goal is to have 100 Points this season then I'm happy and maybe a Top 10 also. I'm happy that I can be fast sometimes also, but I just need alot of work to do. My best ever AOR Season was like around 80 points so. Next up is Suzuka, also a track like this for me. Consistent with not many mistakes but not fast at all. We shall see!