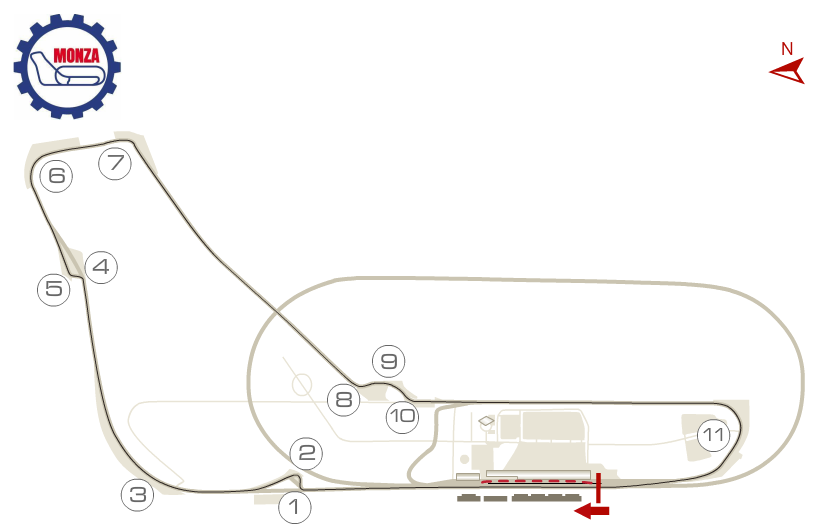 Additional information: First, round 3, which is due to take place on the 27th of December, will be cancelled due to it's proximity to Christmas. Whilst the 27th of December isn't a particularly Christmas related day, it's still close enough that I think taking a break that week will be good. There will be a poll at some point closer to the date, asking whether we should move Montreal to week 4 in place of Indy GP.

Second, a reminder that the races are now 40 minutes earlier than before, which means everything is also 40 minutes earlier than before. This has been done to help get the broadcast back. Speaking of which, I mentioned that round 2 would be the first race broadcasted, however this has now changed to be round 1, and round 2 no longer will be, but from then on we should be good for the rest of the season.
Reactions: Erkka Lindstrom

This also means that i need skins from you all to the skin pack that King will be using. All pls go and send them in and look at the Skin Pack PDF

@McPhilen I'd change the title of this thread if I were you
Reactions: Erkka Lindstrom

SMEAJ said:
@McPhilen I'd change the title of this thread if I were you
Click to expand...

For info I will pop up around 19:40 GMT as soon as I’m back home from work.
Do you use the iRacing voice chat?

Oli Prenten said:
For info I will pop up around 19:40 GMT as soon as I’m back home from work.
Do you use the iRacing voice chat?
Click to expand...

Most people have it enabled, but don't use it to talk to each other. It is occasionally used by myself if there is information that needs communicating to everyone. Most either drive alone or have their own chat servers on Discord or similar.

Copy Phil. I will set it enabled.
Good evening.
Oli

This is quite tough combo this season... New tires makes it very slippery. Lap 1 braking to the first corner can really surprise, these tires lock up easily at first time you go to brakes. Just wanted to bring this up

I think it's well worth shifting the bias backwards a little bit, seems to help with early locking.

I actually found I was locking more in the last 4/5 laps of an official race, possibly due to tyre wear? Either that or I was pushing a bit harder than normal.

Also, I have no idea what my pace is like compared to others, but I've been deliberately avoiding knowing other people's times so that I can just work on it myself. But so far, at least around this track, I've been enjoying driving it a lot. It's a different challenge in a lot of ways, but I think it's more correct now. I think before on v6 we had a far too high peak performance level, I think now it's closer to how it should be. Definitely can't front load the car as much as before because the grip simply isn't there, which takes some getting used to, but overall I think we're in a good way right now... Assuming it's not just because of the track/setup.
Reactions: Erkka Lindstrom

I drove the new tyres for the first time today so results where kinda what could've been expected (beached it in feature lap 1 and DQ in the Sprint) but I have to say this is a blast to drive. Even more than it was with the old tyres. No more hypergrip turn-in and the car tells you where the grip is BEFORE sticking in the wall rearwards.

Sad to see not many people want to drive it. If someone is still unsure if to give it a go or not I can only recommend to do so. Definitely looking forward to get into this more next week.

Also sorry again to Tim for sprint race T1, not the kind of driving we want to see here.

Apologies to Pinsker and Delisle. This iteration of tyres are really tricky on the first lap and I got it wrong on this occassion.

Took a short break after the last race of the previous season so only did a few laps last night to see how this car felt.
I struggled a bit to find pace and consistency with it which showed during the feature race.
As I gridded it came to mind that I probably should have done some practice launches.
I took things quite easy yet still had quite some wheelspin and dropped back some positions from p7.

Managed to get back to 7th againand when going a bit longer before the pitstop gained me some more positions.
It closed the gap to the cars in front quite well and going into the final lap I was in 3rd.
Not sure what went wrong with the Luke but he lost a lot of time at the start of that same lap so I was able to catch up and get a run into the final corner. He went a bit wide and I managed to undercut him at the exit and get p2 done somehow.

Sprint race was more straightforward. I really botched the 1 lap quali and was gutted that I had to start from 10th.
In hindsight this was a bliss with all the chaos in T1, so approaching the 2nd chicane I was already in 4th position and it's exit I was in 2nd.
To top it off Dominik lost his car and handed me the lead and although I struggled a bit to find the balance of driving fast and not making mistakes.
But in the end I was able to bring the car home and get off to a great start of this season with a 2nd and a win

So, I'll be looking at the incidents on lap 1 in the races pro-actively, so no need to bring them to the stewards. I realise lap 1 standards have dropped off pretty significantly, even during last season. I'm going to give the benefit of the doubt for some of the incidents because of the new tyre, so these incidents will be looked at in the same way. However, along with incidents from next week on, there will be a little addition to the penalty system. All penalties will now come with penalty points. Think similar to the F1 system, but more harsh (so, the limit would be lower than 12). Hopefully this will help jolt the field into being a bit more cautious early on, but also hopefully not over cautious.

As for my race night, it went well i think. Really struggled with Q in both races, just couldn't quite get the car feeling great. I've tried a few Q runs this week, and never found myself really improving that much compared to my race pace, so that's something I'll need to work on. Having said that, Monza qualifying might be my absolute weakest point about my driving. I think in the league in all the seasons, I've only ever started in the top 10 like twice before. The lower downforce combined with chicanes is an absolutely demonic combination for me.

However, the races were really good. I was making a few small errors here and there which meant I couldn't ever really catch the cars ahead in the feature, and then I also had a major scare out of Parabolica, but other than that I felt pretty comfortable for the most part. The sprint race was much better, consistency wise. Pace was similar, but was able to do it more often. I got massively lucky with the T1 stuff (which again, being looked at), but from there I felt I had very similar pace to @RedBarom who ended up winning, so I think that's a good sign.

Had a few good battles here and there as well. Overall, a pretty good time. I also really enjoy this new tyre model on this car... at least at this track which is the only one I've really tested. Anyway, very much looking forward to the next one. Unfortunately there won't be a broadcast for that race, and then the week after that is a break for Christmas, but it sure is good to have it back!

Sorry for letting my frustration get the better of me at the start of the sprint race when I got on the radio and text chat. I couldn't believe I got beached on the sausage kerb and literally couldn't move, so even with minimal damage that was my race over right there with a tow back to the pits, super annoying.
Reactions: Erkka Lindstrom

Same for me. Sprint race was a nightmare. I got screwed in second chicane by some drivers who literally crashed into me! Result: towed back and DNF. This cannot happen here guys. Please, the race is more than lap 1!
Reactions: Erkka Lindstrom
You must log in or register to reply here.
Share:
Facebook Twitter Reddit Pinterest Tumblr WhatsApp Email Link
Top Bottom