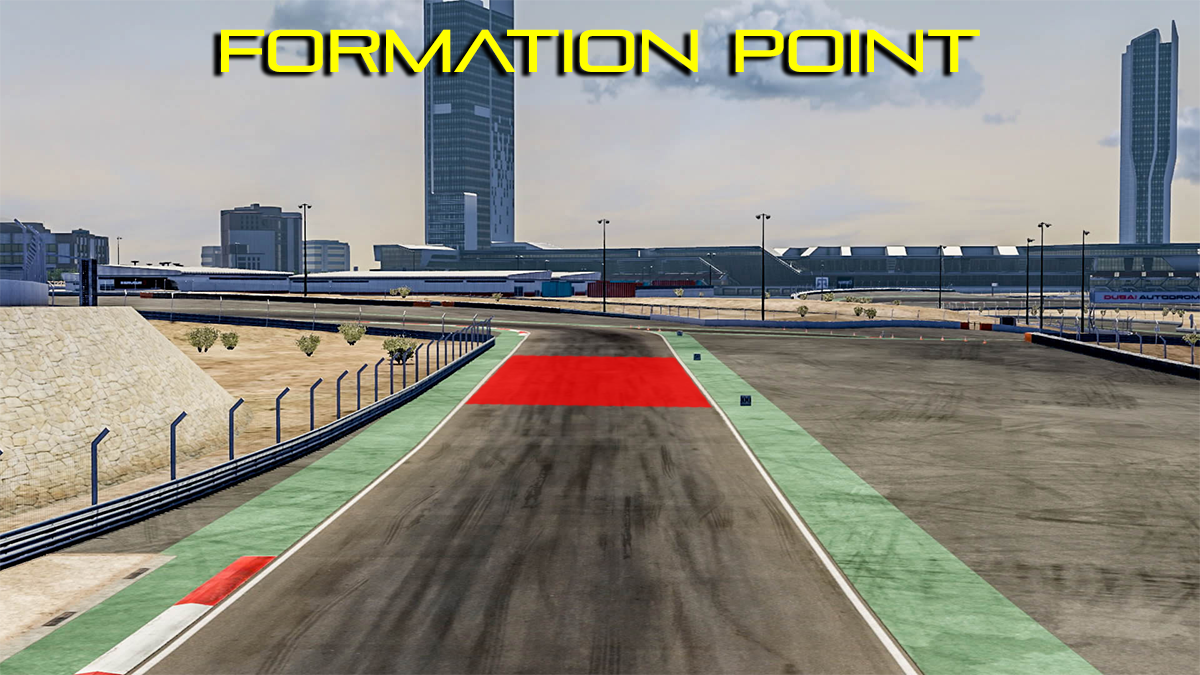 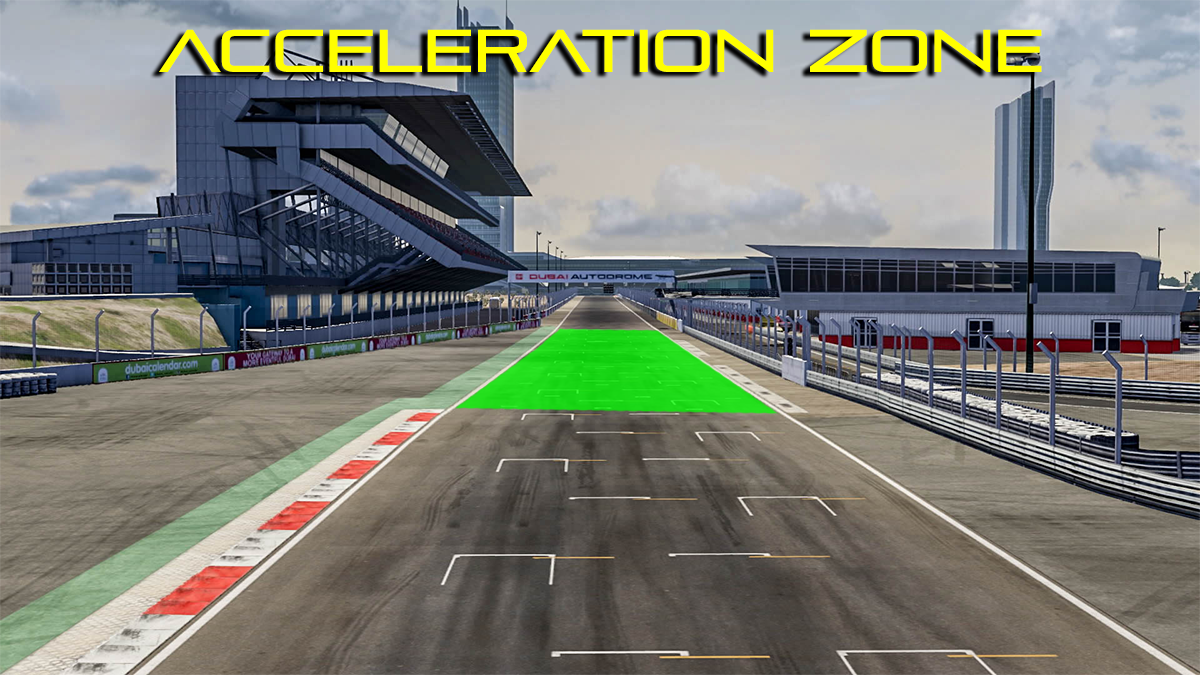 Leave the umbrellas and rain tyres in Germany, because there is no chance of rain during the race in Dubai. However tire management will be a returning factor as the tires can really melt away on the extremely hot track surface if you aren't careful. Hopefully racing at night helps in that regard, with cooler temperatures.

If you have some money to spent, consider staying in the Burj Al Arab Jumeirah hotel, known as the only 7 star hotel in the world.

Overcast conditions for both qualifying and race.

Anybody tried online with race settings yet? I only tried TT and can do a couple of 1:57s but then the tyre temps skyrocket...Will have to come up with something.

I gave it a try offline with race conditions and only managed a 2:00. Was only testing with my baseline setup + a bit of downforce.

I did a couple of laps online with the same result. My Tier 2 buddies were easily doing 1:57s and lower all the time. But I think provided I will ever find a proper racing line in these neverending turns, I should be able to get down to a low 1:59. Which is still pretty slow. Meh.
C

It starts always the same...you are saying that you guys are slow, I’m happy that I am the same slow and then during the quali it occurs you are 2sec faster
Reactions: Xeonski

chabas said:
It starts always the same...you are saying that you guys are slow, I’m happy that I am the same slow and then during the quali it occurs you are 2sec faster
Click to expand...

Indeed. My Thursday night test for Oscherswampen I could barely stay on the track for a lap, but when I did it was a 1:44. By Tuesday my record was a 132.7

Regret to say I wont be able to make this one. This should be the only race that i miss
Reactions: poisike78

We had this track in one of the previous seasons and I struggled. Now after some time I am still struggling, my race pace over 2:00s...

I've done about 5 laps and got a 1:58, and I haven't even stolen a setup for the race yet. I think there's still 0.5-1.0 seconds to find in the last 2 turns of sector 1 when I figure out how to do them even remotely quickly. I can't wait to see how this optimism once again fails me come Wednesday

Driver briefing for Dubai GP has been posted > https://apexonlineracing.com/community/threads/aor-gt3-s11-driver-briefing.48246/#post-675577

Good luck and fair race for everyone. no naughty overtakes
Reactions: D.Brezancic and poisike78

I'm sorry to leave, but I thought it was the best for today. I was quite tired and I was so bored. I'm very, very, very, very, really, very, hate this track. I never understood its line. And of course I'm slow on it (and other tracks too!). I did not want to fight anyone (try to let them go), just take care not to distract anyone. The best one was when I almost fell asleep in one corner. Then I spin, then I left.

Q: Well, this is not track for my driving style and it is still bit mystery for me how make some corners, anyway did my best lap in quali but still finished 9th, not good.

R: First few corners are bit tricky here and it was almost fine but unfortunately someone spun i nfront of me and even I tried to avoid contact I had damage on front but luckily nothing serious. I think I was P7 after first laps with guys in front of me pulling away from me but luckily I was bit faster than guys behind me, so no pressure at all So finally quiet race for me and not sure how, but somehow I ended on 5th place, which is great as I am not good at this track, only not sure why I was one sec slower than on Mondays practice race, hmm. Anyway happy with my race.

@Nila What You did in T1 is not nice in my opinion. Everyone in front was taking it easy and braking early and You just hoped for the best and dived in. Didn't go so well, did it?

I had terrible PC performance from the start, the game barely run, average FPS was 83. There was no grip at all and my best lap time proves that. I have no idea what is causing that (again).
Reactions: Nila

Wish I had something to blame that on, but I don't. I messed up, multiple times.

Over cautious on my first qualy run, a 158, alarmed by seeing 156s instead of 157s. Got traffic on the next lap, even though they let me go I aborted it. Managed to squeeze in to 5th with a low 157 on a final run.

Start of the race the car handled horribly (as usual), I held my position for a while, considered a few optimistic moves but after being too aggressive at Oschersleben I decided not to, so I felt having space in front would help I pitted, too early, landed back in the pack, had to make some passes. Then I spun into the barrier trying too hard to make up time while I had clear track, banged up the suspension and front aero. I should have tried this for at least a lap, as it would probably have been fine a top 10, but decided to pit again.

Caught @Deerladog and had fun with him and his amazing wide blue bus for a while. Amusing, but I was doing 2:01s instead of 158s. Eventually he either got bored and let me go or spun because he disappeared at the 'bowl'

Had quite a lot of fun with some people. Had contact with Chabas I think, but waited on him, gave the place back.
Sorry, I don't think you expected me to put my nose there

Still good fun, hope I didn't ruin anyone's race or be too aggressive or optimistic in overtakes.

poisike78 said:
There was no grip at all and my best lap time proves that. I have no idea what is causing that (again).
Click to expand...

You may consider yourself lucky. I have this problem always, even in pcars 1. It was just from bad to worst. There is a whole story about this in official forum.... it looks like some people have this problem some don't. Very weird. And I am very doubtful about fixing this. I think, well sure, will not buy pcars 3. Good luck.
You must log in or register to reply here.
Share:
Facebook Twitter Reddit Pinterest Tumblr WhatsApp Email Link
Top Bottom