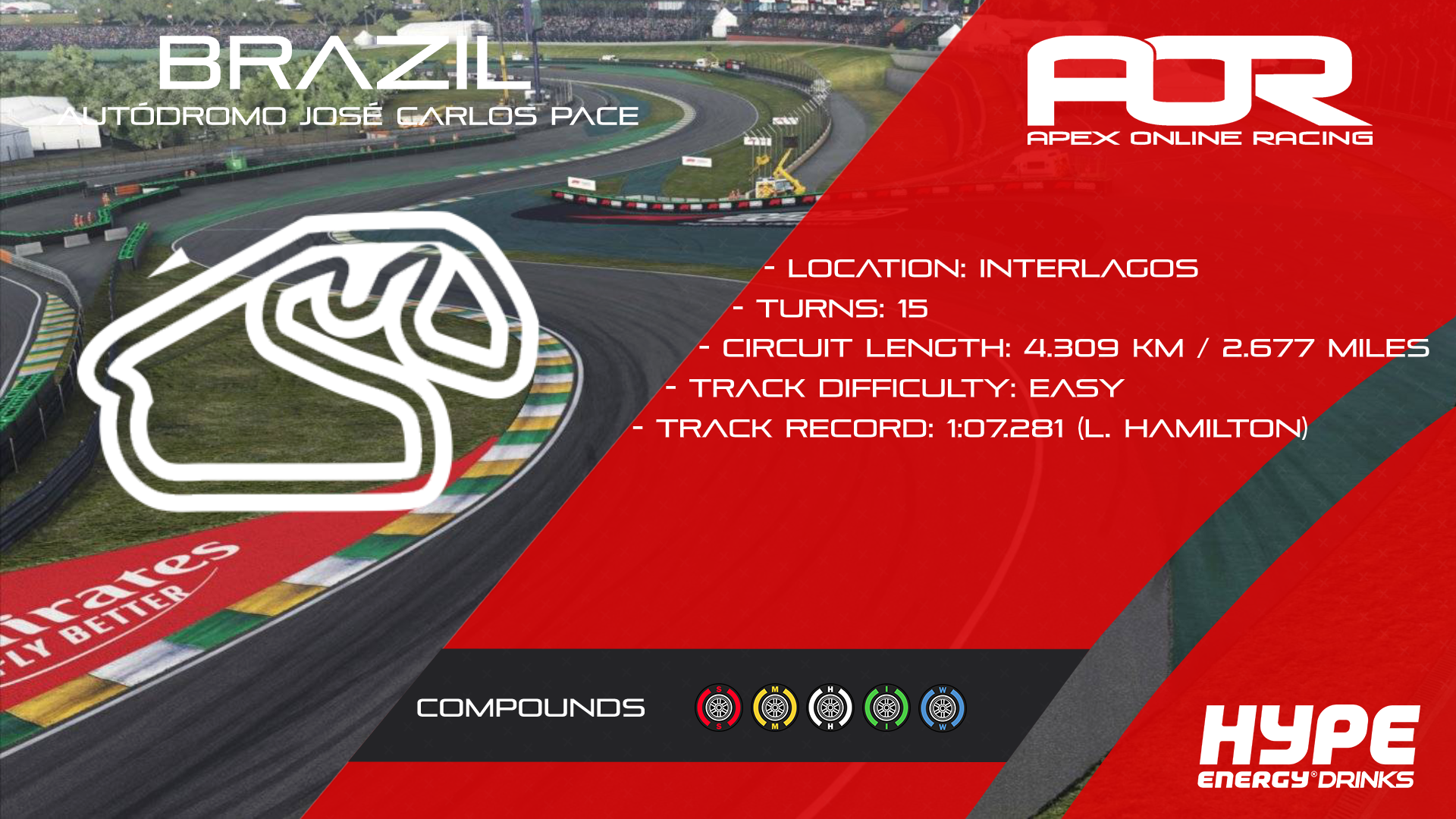 SamGamerOfficial said:
@Hasnain correction* it's Brazil, not USA and it's shows the wrong date mate. We are in 2020 not 2019 anymore
Click to expand...

Nah I'm living in the past

Hasnain said:
Nah I'm living in the past
Click to expand...

Sure, than I am from the future.
T

Won't be making the race, working
Reactions: SolidNinjaSnake and Hasnain

Sorry to have had had a couple no shows @Hasnain. I've had trouble with my internet at my new place and some family stuff that I had to take care of, I'm hopeful I can race next week but I'm not gonna make it tonight unfortunately.
Reactions: Hasnain

How do i join?

Can't race again tonight @Hasnain. Hopefully gonna be able to do next week though as I'm off... Well supposedly
Reactions: SolidNinjaSnake and Hasnain

Qualifying - P7
Long story short, you get four tyres to use in qualifying and I used each one for a lap. Going from the Hard, to Medium, to both Softs. I don't know why but on my final lap, I felt distracted by the missing brake board at T12, even though I don't use it haha. What's funny now though after looking at my footage, is that it turns out it was missing for the run before anyway! So I shouldn't have felt distracted by it but anyway haha. On my final lap, I failed to improve and was off by 0.068. So in the end, my previous lap set my position of P7 with a 1:08.353.

It would have been nice to be higher up but I think I was satisfied with the time considering the top 7 were all covered by less than 5 tenths which was good to see.

Race - P9
Intermediate conditions to start the race so you know I was interested! Haha. Just a shame it wasn't for the whole race! Anyway, I had a great start off the line passing @Heaxxy and @Hamres22 and almost had @Zaack too but he had the inside for T2. A bit lucky no incidents happened at T1 as I think Hamres, Zack and I were three wide, plus we had a lagging Heaxxy who was ghosting. So thankfully nothing happened but Heaxxy's ghosting was a distraction as he was driving through me here and there on the opening two laps. Then it all went bad as I made a pass on Zack and unfortunately, I ended up tagging the back of @robin8f just ahead which sent us both spinning around. Sorry about that.

After a quick spin to face the right way again, once I got going I now found myself in P11 behind @rich500 who I quickly passed at T4 and @robin8f too a lap later. I then had @Hasnain and @silver-sponge ahead of me who I wasn't looking forward to closing in on as they were desynced with each other and were constantly riding each other. Eventually they did separate as it looked like Silver went deep at T1 at one point where a lap later, I went for the move there, had to do the switchback and passed around the outside of T2. Hasnain was next and I was pretty lucky he saw me, as I wasn't even trying to pass at T1 on the next lap, but he braked earlier than I expected and so I took avoiding action down the inside and ended up passing haha. I then had @EOttoes next and again, the following lap at T1 I made the pass, although this time I did brake a bit later than usual and accidentally bumped wheels with him. I know I apologised after the race, but sorry again Hasnain and Eottoes for them two moments. I then ended up gaining another position after @Heaxxy had gone off I think on Lap 11.

So I was now up into P5, setting fastest laps for a change when the Safety Car comes out on Lap 13. I then made a huge mistake, one that I've never made before. I was so focused on thinking about what to do regarding pitting/tyre change, that I completely missed the delta... It went so quickly that I saw a message pop up at the top of the screen, but I didn't have enough time to actually read what it said. At first, I honestly thought I had been DSQ! Then I realised I hadn't, so assumed I had just gotten a 5 or 10 second penalty or something. So I continued on and pitted for Medium tyres now that I had finally decided haha. I jumped @Hamres22 in the pits who had also pitted just ahead of me, resulting in me rejoining the track now in 4th place! Carried on with the Safety Car restart and then driving up the hill on the following lap, I see at the top of the screen: "Drive Through Penalty"

So I served the penalty the following lap on Lap 18 and I had now completely ruined my race as I rejoined the track in P10. I think it's safe to say that you already know that not much happened from this point on haha, as I continuously pushed to try and chase the car ahead down which was @rich500. That being said, it was a fun finish to the race as I did finally catch up to him and had a real life Gasly Hamilton moment as I tried to slipstream Rich to the line, but unfortunately I wasn't able to pull it off. I finished behind him in P9 by 0.144 seconds. Although I had a penalty anyway so I still would have missed out haha.

Conclusion
This could and should have been so much more. It was going so well in the wet, minus my contact with Robin, and then I went and absolutely ruined it all by that one mistake under the Safety Car. I don't know if I would have had the pace in the dry, but with penalties and everyone bunched up, maybe I could have gotten something. Maybe I could have gotten a podium, but things would have been different had I been bunched up with everyone else no doubt anyway so yeah, ah well...
Reactions: robin8f, Zaack and EOttoes
You must log in or register to reply here.
Share:
Facebook Twitter Reddit Pinterest Tumblr WhatsApp Email Link
Top Bottom