Below you can find an overview of the league tiers and driver placements for Season 16 of the AOR Hype Energy F1 Leagues on the XB1 platform!

For this season we have had a record breaking number of sign-ups on the XB1 side of AOR, with around 225 drivers signed up overall! The increased numbers has obviously increased stress on the whole Xbox team, so I'd like to thank my co-runner, @Jamie183, and the other XB1 F1 coordinators for their amazing work with that! In the end, we have ended up with a total of 8 main leagues, plus 3 assist leagues - 11 leagues overall on the XB1 platform! I am also pleased to say that the F1, F2 and F3 leagues will have a live broadcast on the official AOR YouTube channel for this season!

The amount of no assist tiers is also changing. F1 through to F4 will now be no assists, and F5 to F8 will be line and auto gears allowed. This change does not affect the assist leagues.

When deciding where each driver should be placed, we have considered multiple factors: the driver's Time Trial times submitted as part of the sign-up process, the driver's league performances in Season 15 (for returning drivers), the driver's evaluation race performance (for new drivers), and in some cases general knowledge about the driver's ability. Drivers who failed to submit both time trial, have not been included in the placements. Drivers who only completed the time trial have been placed as reserves (or possibly a full time driver depending on numbers in their tiers).

The competition for places has as usual been very close, and as you can imagine, it's impossible for us to make 100% perfect placements with this many drivers to consider, and limited information available to us - and with drivers' pace also varying from circuit to circuit, there will surely be some performance overlaps between various leagues. However, we hope that everyone has ended up in a league where they will feel competitive and have a chance at fighting for good positions if they put the effort in!

We will be using the first 5 rounds to re-evaluate our placements, and any changes will likely happen in this period. 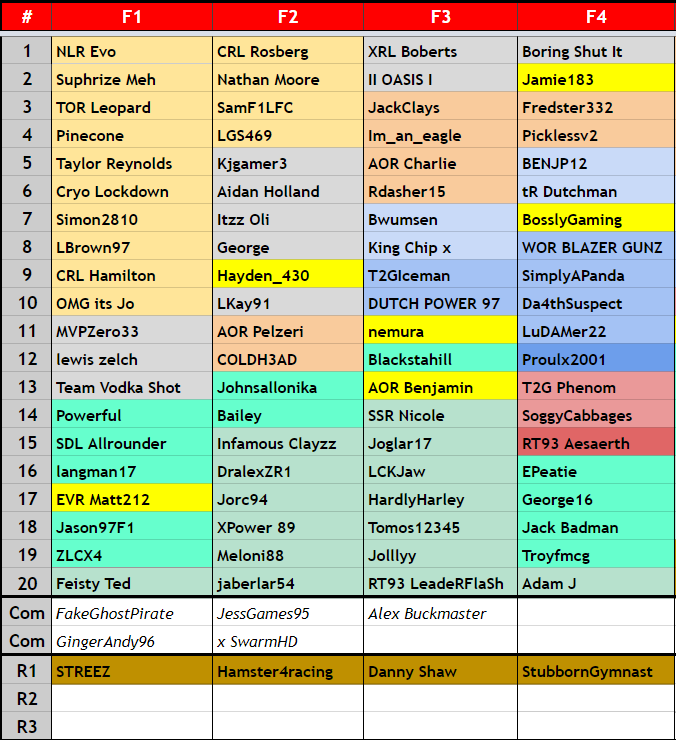 Good luck in the season opener on Sunday, and remember to keep it clean!
Last edited by a moderator: Sep 25, 2018
Reactions: Cinnamon Rage, Greg, Da4thSuspect and 1 other person

@JRT.Simmo am I just really stupid or do you not have a seat
J

JRT.Atomik said:
@JRT.Simmo am I just really stupid or do you not have a seat
Click to expand...

No I can't see my name

I can't see my name

I can’t see my name either

:'( just realized I posted with no pictures what can I do to quickly hopefully get placed in somewhere please and thank you in advance

I got the game today, can i still sign up

Come on I didn't get selected

kogoda said:
Come on I didn't get selected
Click to expand...

That would be because your TT times were incorrect and not rectified.

BosslyGaming said:
That would be because your TT times were incorrect and not rectified.
Click to expand...

I put my tt in the discussion thread. TruckGameBernie says theres a place available. Could i take that

xMinxG said:
I put my tt in the discussion thread. TruckGameBernie says theres a place available. Could i take that
Click to expand...

Not right now, no. You still need to sign up, which will open again after Round 1.

BosslyGaming said:
Not right now, no. You still need to sign up, which will open again after Round 1.
Click to expand...