Qualifying Position: 4th
Qualifying Time: 1:26.855
Finishing Position: 14
Notes: I lost all controller vibration after lap 5, therefore I had no sense of traction or braking and spun out at least 3 times as im very used to having vibrations on, and im relatively new at no assists as well. Franglish was close to me a couple times and he randomly went off but he was blinking like crazy on my screen, jumping back and forth. Have video if necessary. Overall it was a pretty horrible race for me and I lacked the consistency im used to having because of it. I have much more potential than that, as my qualifying shows, hopefully ill still manage to get a seat. Was fun racing.

Qualifying Position: 4th
Qualifying Time:1.26.907
Finishing Position:15
Other notes: lap 2 i spun and my tires overhated but a continued one more lap than a pited for mediums, lap 15 i made a mistake at the 2. sector and run wide it cost me a little bit of time lap 24 i made another mistake at 3. sectort

Qualifying Position: 14th
Qualifying Time: 1:28.141
Finishing Position: 13
Notes: My 1st league race ever. Nervous in both session. Qualify session was ok but was all over the place with car control.
Race: had a good start. Was going good was up to 4th and then was 10th after pit for a long time and spun out 3 times which gave me 3 secs pentaly during last laps of the race also was involved in battles with couple of racer which gave me experience but was not needed. Have potential to do better.

My 1st AOR race I loved it very bit but was very nervous.
Thank you Team AOR

Quali Position: 7th
Quali lap: 1:27.085 (on softs)
- My first lap in quali on the supers was in rich fuel mixture and medium ERS as I wanted to qualify on the softs. It was just to give me a feeling.

- My fastest lap is not representative because I never got clean air. I was stuck behind someone or battling for the whole race and the only time I had clean air was when my tires were at 78% towards the end of the race.
- On lap 7, I touched the outside kerb at turn 7 and had a massive drift which cost me some time.
- I was battling pretty much the whole race, at the start I was catching the supersoft users and when they pit I was battling Meloni until around lap 25. During this fight, I think lap 13, at turn 2 Meloni and I touched but it was desync because he wasn't that close to me on my screen. Also, there were a couple times where he braked earlier then me and it caught me by surprise which is why I went down his inside at turn 1
- I got blocked by a backmarker on lap 27 but it only cost me about 4 tenths.
- Tomos overtook me on the last lap as my tires were dead. The lap got cut out of my screenshots but I think it was a 1:31.8
- For the last 6 laps or so someone took out every braking board at turn 1 so I didn't have a reference point but it didn't cost me that much time

Bahrain is one of my worst tracks so this was hard I think I can be faster with even more practice on the track.

I was using no assist

Qualifying: 10th 1:28.0143
Race: 12th
Got dumped on Lap 4 whilst running in the pack and then spun the lap after because my tyres had overheated due to the collision.Had screen freezes on lap 6,10 and 11 which cost me more time, all these things cost me around 40 seconds overall I reckon. Race pace was very consistent considering my tyres were older than most.

Qualifying position: 9th
Qualifying time: 1:27.406
Finishing position: 6th
Notes: Had a clean start, settled into the race quickly, stayed with a group in front of me early on before first pit stop. I did a 2 stop strategy with my second stint being very quiet with no on track battles. Was around 3 seconds behind a group in front of me before last pit stop. Pitted a lap too late I'd say but got past a couple cars 1 stopping and got AOR Charlie at the end for P6. No major mistakes and a consistent race for me.

● Race Director Images:
Unfortunately my stream cut of the last few seconds when I clicked view lap times. But I can honestly say barring the first lap and the last couple when I was on super softs my racing laps were always 1:31s+. My actual fastest lap was a 1:29.6/

● Race Report:
Qualifying Position: 14th
Qualifying Time: 1:28.406 (I was actually 8 tenths up in the middle sector on my final lap but I binned it in the final corner, so this wasn't a true reflection of my qualifying pace.)
Finishing Position: 13th
Other notes: Was running 6 or 7th on lap 10 but was punted off by AOR Charlie when he was going for an overtake and never really recovered. About lap 25 I pitted for supers as I was no where near anyone else and tried for a fastest lap, hence the extra stop than was needed. But didn't get the fastest lap as the previously mentioned driver managed to hit me again even though he had lapped me. Attatched is video for proof ()

Qualifying Position: 12th (with a 5 place grid penalty explained below)
Qualifying Time: 1:27.623
Finishing Position: 8th
Other notes:
The 5 place penalty i got in quali was because my screen froze on my outlap and someone ran into the back of me. Nothing i could do about it because the contact had already happened when the screen unfroze.

Started on softs and went to mediums so never had a lot of pace throughout as i was managing tyres. Got stuck behind @SoggyCabbages for a few laps at the start, and lost some time, and then made a mistake on lap 8 which sent me into the gravel. Had a quiet race after that and just kept consistency for the last 20 laps, and gained a few positions from mistakes and pit-stops, with one ontrack overtake around lap 22 on @Picklessv2 but didn't lose a lot of time.

Qualifying Position: 12th
Qualifying Time: 1:27.569
Finishing Position: 7th
Other notes: Good race for me but started bottling near the end due to stamina with being new to the wheel, left ankle started going , maybe 5-10s quicker race time without mistakes but I'll improve throughout the season.

Qually 15th Race 12th - bahrain isnt a strong track for me, moved from pad to wheel when the game came out, and only had the game for 2 weeks.

Really really messy race. Lost the lead at t4, then people started punting me , fell to 9th or something, then worked my way up to p2 only to have a lapped car blocking me on the last lap. Finished 3rd but the 1st stint I didnt have any laps where I wasnt battling. 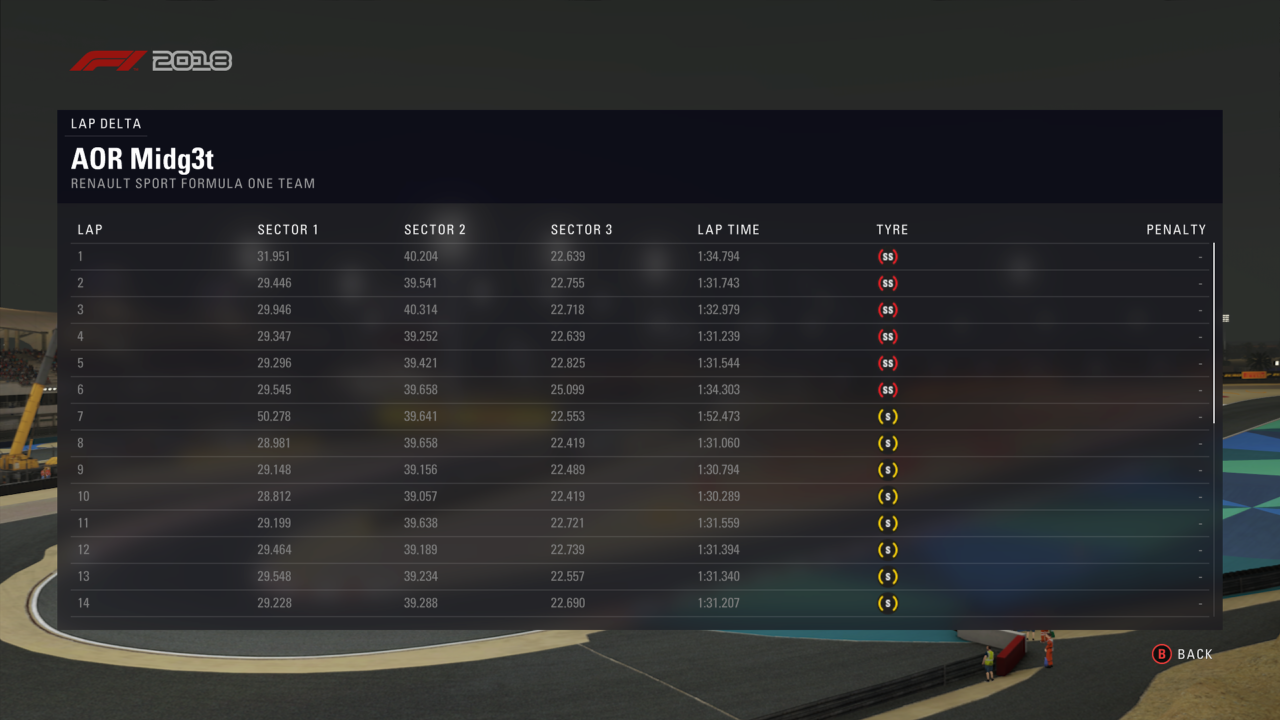 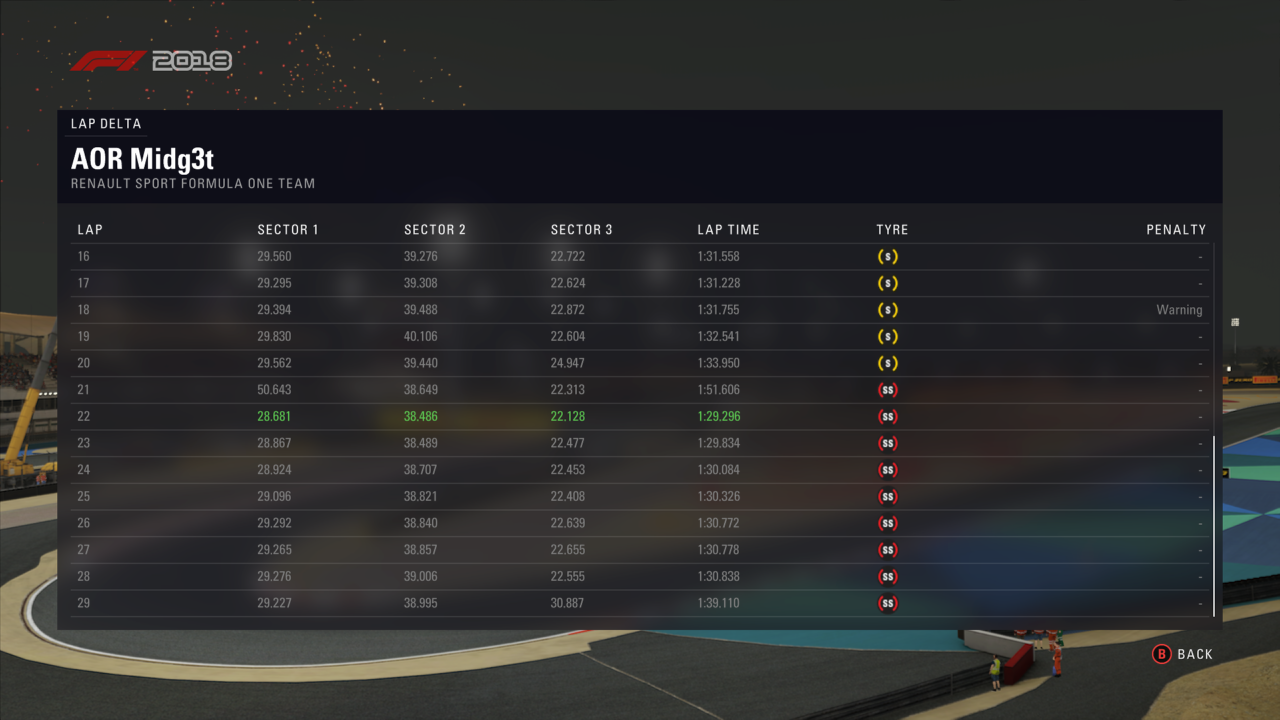 Race Report
Assists Used: Racing Line
Qualified - 3rd
Qualifying Time - 1.26.767
Race Finish - 4th
Other Notes: was a very fun Evaluation Race, did spend about half of the first 10 laps battling with VRT Verstappen, and at the end of my soft stint, i was battling with Z3lchy and johnsallonika43

● Race Report:
Qualifying Position: 7th
Qualifying Time: 1:27.191 (Softs)
Finishing Position: 2nd
Other notes: Was in quite a big group battling in the first few laps but other than it was mostly a quiet race
C