Sorry for late post.
Was away from the end of last week

@Logan Can you do your magic with the formation points / acceleration point images please good sir?
And also the driver line up.

I'll try to run the Pace Car this week. 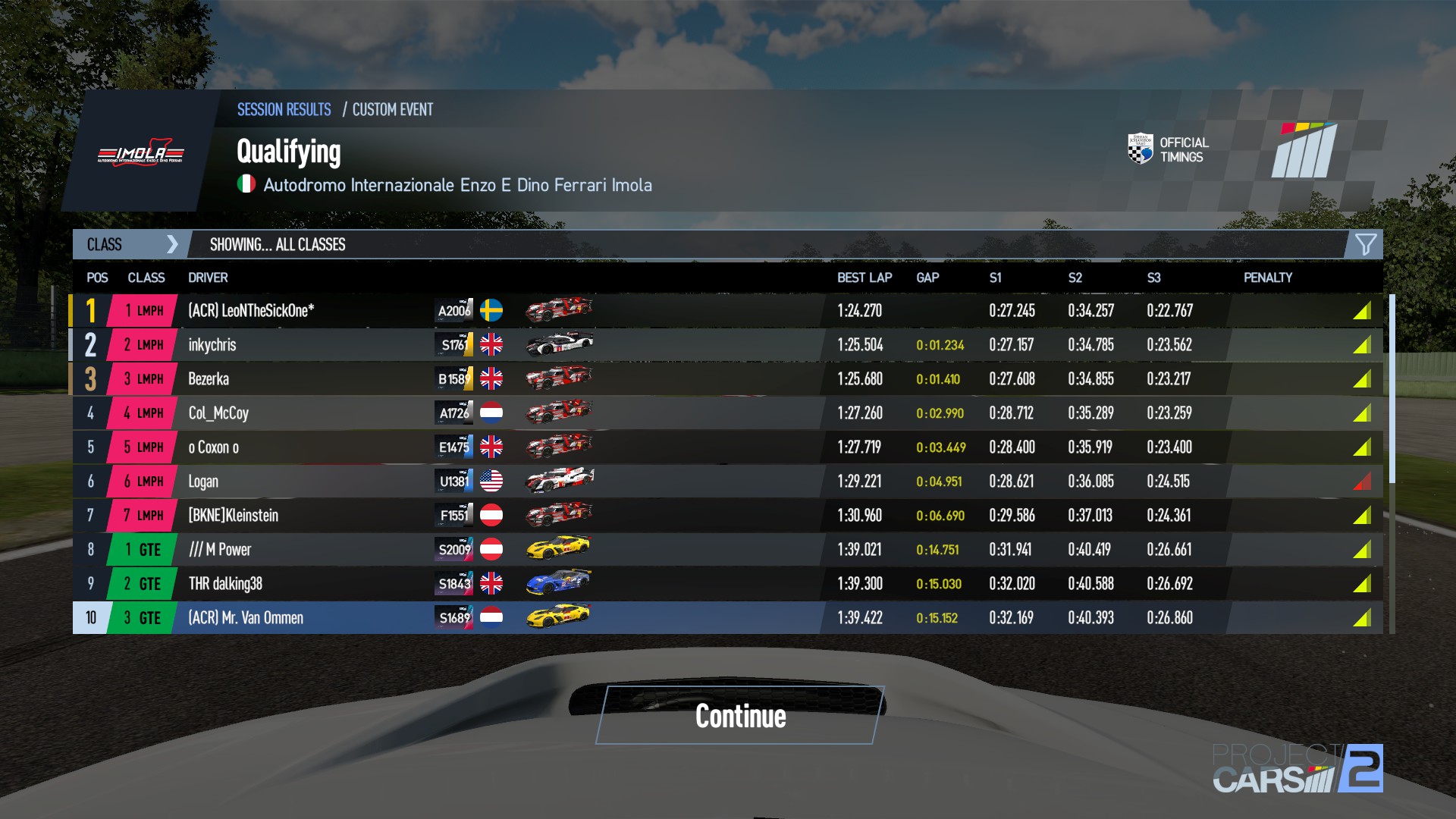 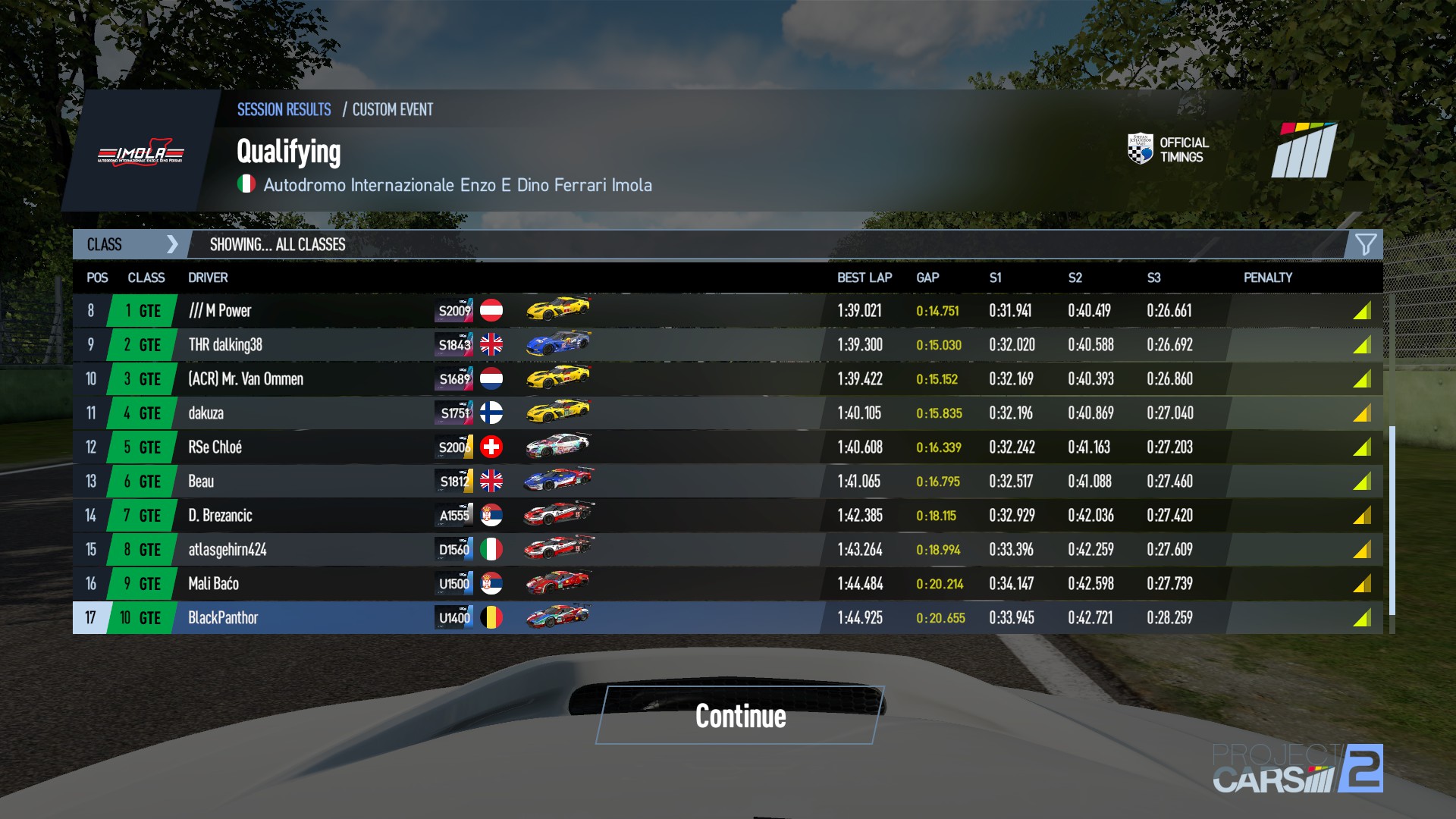 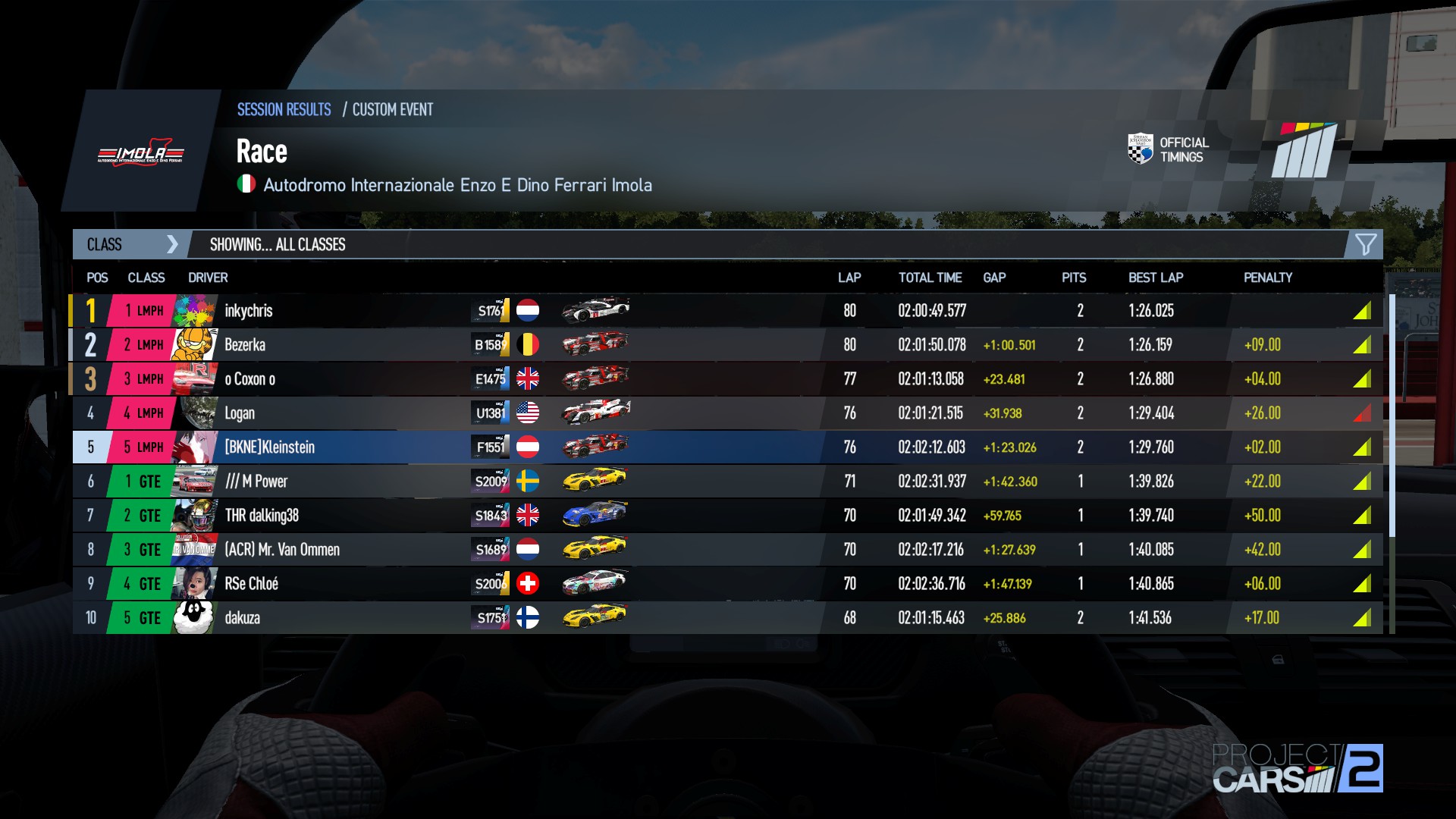 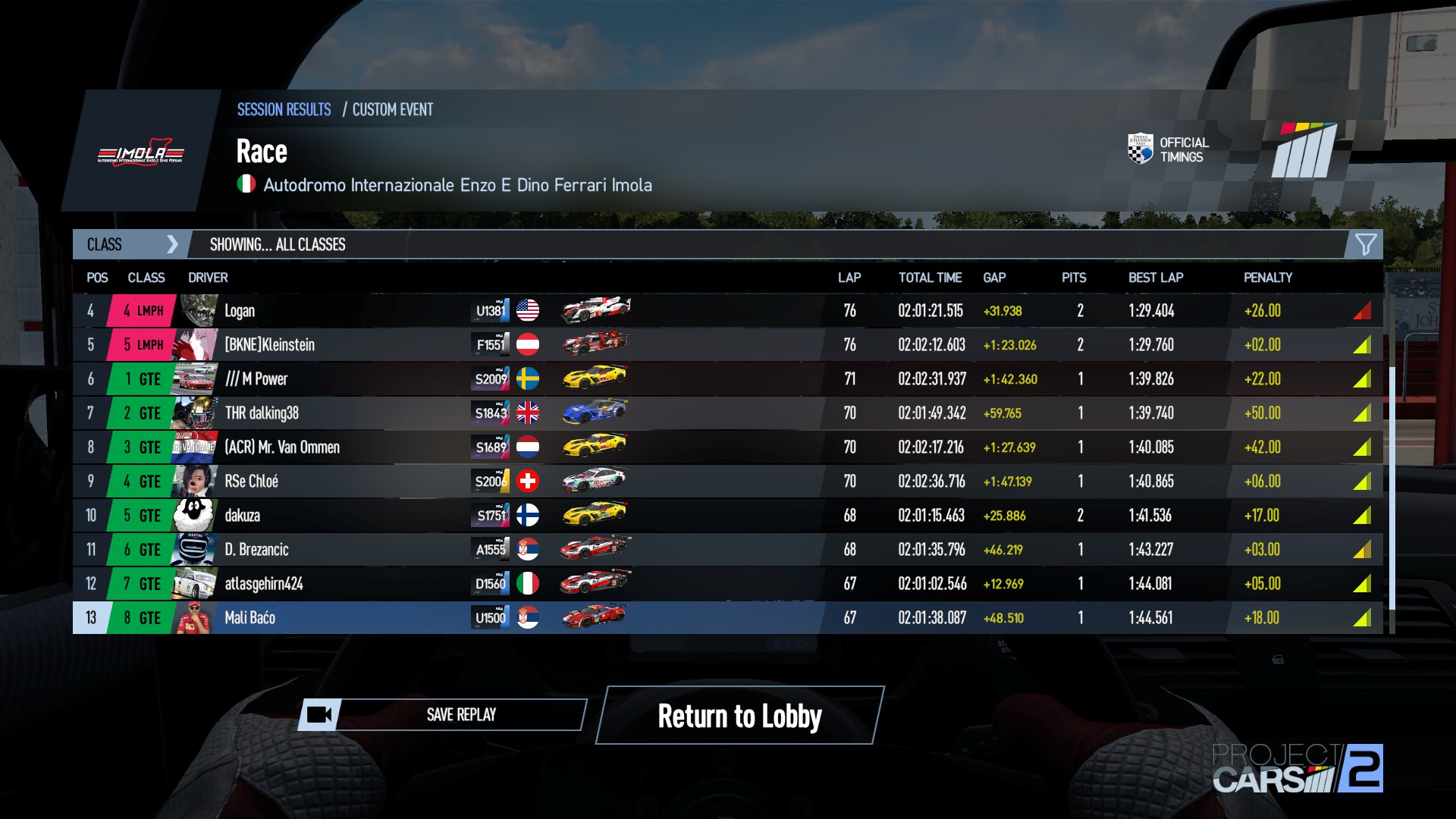 I believe we don't need a 5 min block time in qualifying session, neither 20 min time for it.
Reactions: AndrexUK and Logan

Sorry for late post.
Was away from the end of last week

@Logan Can you do your magic with the formation points / acceleration point images please good sir?
And also the driver line up.

I'll try to run the Pace Car this week.

Unfortunately not, shall be on holiday next week so won't be around to livestream.
Reactions: AndrexUK


Please can I request the honor of your company on Thursday 27th of this month.

You are invited to attend a gathering of misfit racing (Much like your very own 'Wacky Races').

I intend to drive the pace car for this meeting, and once the 'racers' have been released, I will be available to join you in your elevated viewing platform of the 'commentary box'.
I say 'commentary box', however this season's budget was mostly spent on Pringles, and so in reality, the Com box is actually an office chair propped up on 2 ladders, but it's a swivel chair, so you can get a semi decent view on both side of the track.
Don't worry about the ladders being different lengths, I've put a football under the small one!
And as a bonus, it's not expected to rain on race day, so you should even be able to stay dry too!

I may have to sit on your knee after parking the Pace Car, but I think we know each other well enough by now...

Please let me know, so I can order some gold tinsel, worthy of the King's presence!

I have had a horrifically bad today, and this was exactly what I needed to pick me up from that, I am very grateful to you lord @AndrexUK

I will check the calendar when I am home and report back my availability. The racing I'm sure will be good but having the opportunity of you on my knee? I will move the heavens for that
Reactions: AndrexUK

That was quite an emotional conversation, i think i will leave the stream open to hear you guys declaring your love to each other during the race
Reactions: AndrexUK

Hi, i'm not sure if i will be able to make the race, there is an alert for a heat wave in France. I'm not sure it will be safe to do 2h of racing as i'm alone in my apartment, i will confirm depending on the temp of my apartment on race day.
Reactions: AndrexUK and Logan

I wont be avle to join this race sadly, but I’m 100% ready for Lemons
Reactions: AndrexUK and Logan
F

I'm sorry but this is clearly not possible for me to do the race, tuesday i did 30min on ACC and i was already dying at the end but here i'm sweating just by writing this message.
Reactions: AndrexUK and Logan

Hey guys, I'm afraid I can't make it today because of work (again).
Anyway, I hope you will have a good race and I'll see you at Le Mans!
@AndrexUK
Reactions: AndrexUK

Yo guys. I don't know how to, or if it's even possible to, tag the drivers of this championship.

Due to a mistake of my own, I lost connection with the front-runners of the race yesterday. Making a couple of more mistakes made me fall even more back, but hey **** happens.

The reason I am posting this is the following:

I realize if you make a stupid mistake, you might end up alone, but if I make a quick calculation I have been running solo 7,5 hours and a bit in the league right now.
Why am I saying this? I really don't like to drive this much time on my own, just piling up laps in a GTE car while having the feeling it has no meaning at all. I am also not enjoying it one bit.

Yesterday we finished with 12 or 13 people. (was it 5 LMPH cars and 7 GTE cars?) Yesterday was not an exception. This is the core reason of people driving alone for so much time.
I can tell you, I wanted to leave after 15 laps yesterday, but I didn't. I actually wanted to leave in most of these races, but I didn't.
I would actually feel a certain emotion of shame towards the guys in the commentary box, live-streaming this thing if I would leave, not to forget about setting the league up and monitoring it.

Technical and health issues obviously are a thing, but for the rest I would be surprised (as we had?? 62 signups??) that 50 people where struck by that.
Call me a hypocrite as I also have skipped a race here and there in the seasons I ran with AOR, but I can't be doing another 2+ hours alone on Le Mans.
Even if next race everyone has a viable reason to not join, I can't drive alone for that amount of time.

To underline my hypocrisy, i'll see what happens next race. I might and I might not join.
Reactions: Logan and AndrexUK

Maybe (and i said maybe) we could open the last round for subscription like a social event but with a verification that the user has already run in an AOR league before.

It could help to extend the field and keep a safe and clean racing. Furthermore, i think that Le Mans is easy for multiclass racing.
Reactions: Mr. Van Ommen

Maybe with 2 tiers, we would have more people attending. Having so much reserve drivers killed half the grid i think. Tbh i thought i would never drive at all in this league being reverse 20 or something, somehow i ended up doing all the races.
We can try to open the last race like it will be a social race but i don’t expect to have a full grid with this.

I was in the same situation as @Mr. Van Ommen, my opponents were @dakuza and @Beau mainly but only for the 1st 30min of each race roughly, the rest i was driving alone.
Reactions: Mr. Van Ommen

Xeonski said:
Maybe (and i said maybe) we could open the last round for subscription like a social event
Click to expand...

Not a bad shout!

Will open it up on the social threads!


To be fair, Endurance racing will always have a large element of racing alone. It's the nature of the beast.
It will always be a bit of a niche market, and with less people signing up (compared to GT3 leagues), the skill / pace spread is naturally wider.

The drop off happens every season, and it's of no suprise to me in all honesty, but that was the reason for keeping it 1 tier, and have a large number of reserve drivers that should be available to fill in the gaps to keep the lobby full, but the drop off this season (along with the number of ppl that signed up and have never turned up once), has certainly been higher than normal.

Rather hypocritical of myself, as I am also 'One of those guys' myself And for that I can only apologize

I suspect there is a lot of people getting a little bored of pCars2 (certainly with the release of ACC recently - And I can even confess to that myself) however, my own personal reasons for dropping out was more that I was really not enjoying the LMPH car(s). I (perhaps foolishly), switched from GTE > LMP in order bump up the number of LMP cars on the grid, even though they were far from my first choice, but I felt it would be better for the league.
After several races, I unfortunately confirmed that I outright dislike the faster cars. And while I should perhaps have just honored my signup and seen the season to the end, it wasn't that I didn't LIKE them, it was I really DISLIKED them I race for fun, and I was not having fun driving those things (I'm getting too old / slow to manage them...)
Perhaps I should have switched to GTE before, but I'd lost a fair bit of love for pCars2 on the whole.
I'll run something for LeMans in either LMPH or GTE one way or another to get another car on the grid.

But I do agree, and although it's not comparable to having another job, creating and running a league does require me (and Logan / etc) a lot of personal time to maintain.
To then see only 18 drivers turn up does unfortunately make you start to think if it's worth the effort

My commitment to the league itself is certainly the same as it was at the start, and have no intention of walking away at all.
But the driving side? Not so much. That said, I have no issue adding at least 1 more car on the grid for the final race.

Hopefully we can pull in some other AOR regular's to bump up the numbers!
Reactions: dakuza and Mr. Van Ommen

So what is going to happen? We shall have a last race as social race just to fill the lineup with some people who don't run the league?!
Reactions: AndrexUK

Yeah, normal league race, but will open it up to AOR drivers as well.
But they will be classed as secondary reserves.
So of course, ppl that have already signed up will have priority.
Reactions: D.Brezancic

What an enjoyable race for me. Although I made mistakes, mostly slowing down for track excursions but not enough to avoid the penalty, I was pretty satisfied with my driving.

Ferrari was amazing in Sector 2, maybe even the best of all the cars. I opted for low downforce setup so that I wouldn't be a sitting duck on the long straight. It paid off as I could hold of Ford GTs, but still couldn't keep Corvettes at bay.

Lovely battle with @atlasgehirn424 lasted more than an hour, with us two being within a second and sometimes separated by an inch or two. Full respect meant that noone was pushed out, and it was truly a great experience. Also, keeping @dakuza behind for a few laps was really honoring, and a great reminder of the battle between our cars IRL at the Le Mans two weeks ago.
Reactions: atlasgehirn424 and dakuza
You must log in or register to reply here.
Share:
Facebook Twitter Reddit Pinterest Tumblr WhatsApp Email Link
Top Bottom