Question: In case of drivers doing more than one evaluation race, which results do you take into account?

Had a good qualy got 7th was happy with that

Race start was good bit confused when Snarf slowed down but found out why later.
Had to go way to wide into turn 10 lap 3 to avoid cause and accident from what I thought was going to be an
ambitious overtake by someone and had I turned in there would have been contact. Lost about 6 places as I kept
to the grass to avoid coming back on track in a dangerous manor.
Got a penalty for CC, deservedly so, dirty air effect is real
From then on was just taking passes as I could get them and avoiding incidents when I had to thus the inconsistency in lap times. Got away an kept a decent position into turn 1 but kept on the outside then made a few places then immediatly got a couple of give place backs.
then a time penalty... more give place backs but not sure how this happened .anyways got upto 9th or 8th at one point then messed up lookin at fuel mix and crashed :facepalm:.
waited for cars to pass to rejoin so ended up at the back most of the race .
i followed aen i think for a while and i saw a few other drivers here an there .cant remember who ?,did one or two over takes one bieng a driverless car which was a bit scary lol,nothing major really finished in 18th but enjoyed the race and looking forward to the season.posted all results as some forgot including me .. forgot my lap times too sry guys...had to screenshot recording for qualy

Qualifying went a lot better than expected, went to the soft tyres and managed to pull off a 1:48:657 on my first and only lap. At the start of the race I got an illegal overtake, for what I can only see the game went all random on me, as @Albin Mansson in the Ferrari on the right of me went into a half spin and over the track limits? So I had to give the place back into a dangerous situation of going up Eau Rouge dropping me down from 5th to 9th position. Not one to be disheartened I started to fight my way through the field to make back up those places I had lost

Video of the illegal overtake

Video of the incident

I had some great close and fair racing throughout the laps with @GRZEGORZ especially loved going down Blanchimont downthrough the last chicane (bus stop?) side by side

Shout out to @[email protected] - @Thompson - @Miniblack and @Punisher for the clean overtakes and racing.

Hopefully codies will fix the missing gear indicator for cockpit drivers (until first pitstop) this week...
Race highlights and fails:

Snarf Snarf said:
Shout out to @[email protected] - @Thompson - @Miniblack and @Punisher for the clean overtakes and racing.

Overall I had great enjoyment from this race looking forwards to the next
Click to expand...

Yeah good racing overall, just give others just as much space as you'd expect for yourself and enjoy the fights! 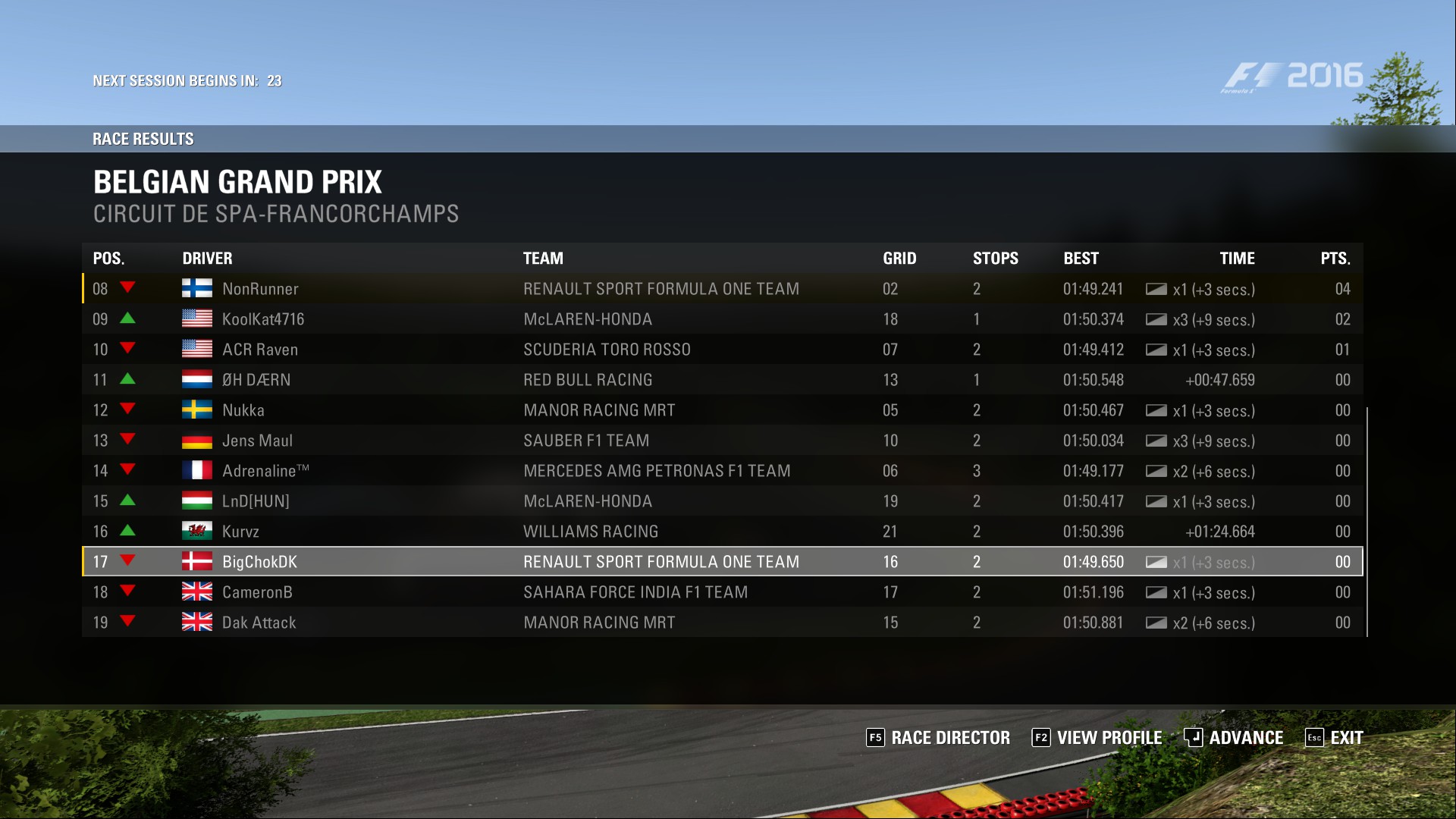 1.48.005 in quali wasn't bad for me
However, there was several fast drivers in the race so ending up 14th at quali was actually better than expected.

Race start went on pretty well - then came turn 1 !
I hit @H_pro1 from behind (sorry for that!), luckily it looked like he managed without too much trouble.

Then off we all went, the car felt good and confident..
so good that I was a bit optimistic at fighting with @KurvZ , and I ended up waiting for 20 minutes (or so it felt) after a simple race accident where @KurvZ's rear tire hit my car.

Luckily @Marco FD came out from pit and I had a great fight - all the 1/3 part of the track were I could follow him.
Then the car and I decided to make an exiting "solo accident" and made a great spin on top of Les Combs, just to get further behind for the fun of it..

The next 20 laps or so was like one of those Monday morning drives when you know you got up 25 minutes to late but you (try to) save time by cutting some yellow lights while looking for cars with sirens and police badges, except there were NO cars nearby (and no serious yellow lights either actually).

WELL I managed to overtake ONE car (because it went to pit) and OOH here it comes paampaaam:
Finally in the far distance I could see a car on medium tires in trouble, and within just a few laps I was able to catch up and overtake it!!!
Last attempt to do something impressive was to get nearer @KurvZ who was somehow next car in front of me (and in visible distance too).
Doing my very best I managed to hunt him down and DID THE OVERTAKE - just to realize later that it was a gesture to let me pass for ("if") the accident earlier in the race was somewhat to blame him for (which it wasn't)

I must say that it was a scary experience but also exiting to race against so many fast tough guys, and maybe next time.. or next time again... or.. somewhat later...

Here's a video with the boring 20 laps cutted out

LAP 1: Started on Soft (Yellow Stripe) tyresDidn't gain any positions off the line but capitalized on ACR Ravens spin at Bruxelles (Turn 10) and went up to P7.

LAP 2: Adrenaline collected Nuka at T1 and I was upto 5th, only to be slipstreamed by Chicane into Les Combes. Down to P6. Chicane then lost the rear end at Bus Stop and hit me, causing me to spin and have a slow lap 2. Down to P12.

LAP 3: H_pro1 went up my inside due to my poor run off the bus stop due to my spin, locked up and pushed me off the track but no damage was done timewise. Passed H_pro1 later that lap. Adrenaline this time lost the rear end at the bus stop and I was collected there for a second lap in a row. Down to P13.

Lap 13: Been in clear air after pitting early and was able to show my pace and put some good laps in, after everyone had pitted I was into P5 and battling with CalHD and Chicane again for P3. At Blanchimont I went around the outside of CalHD and run wide off the track but kept the position. After looking at the footage I should of given the position back.


Comments:
Without being collected by cars losing their rear ends I hopefully would of been battling for 2nd with Fisi, none the less I enjoyed the race: 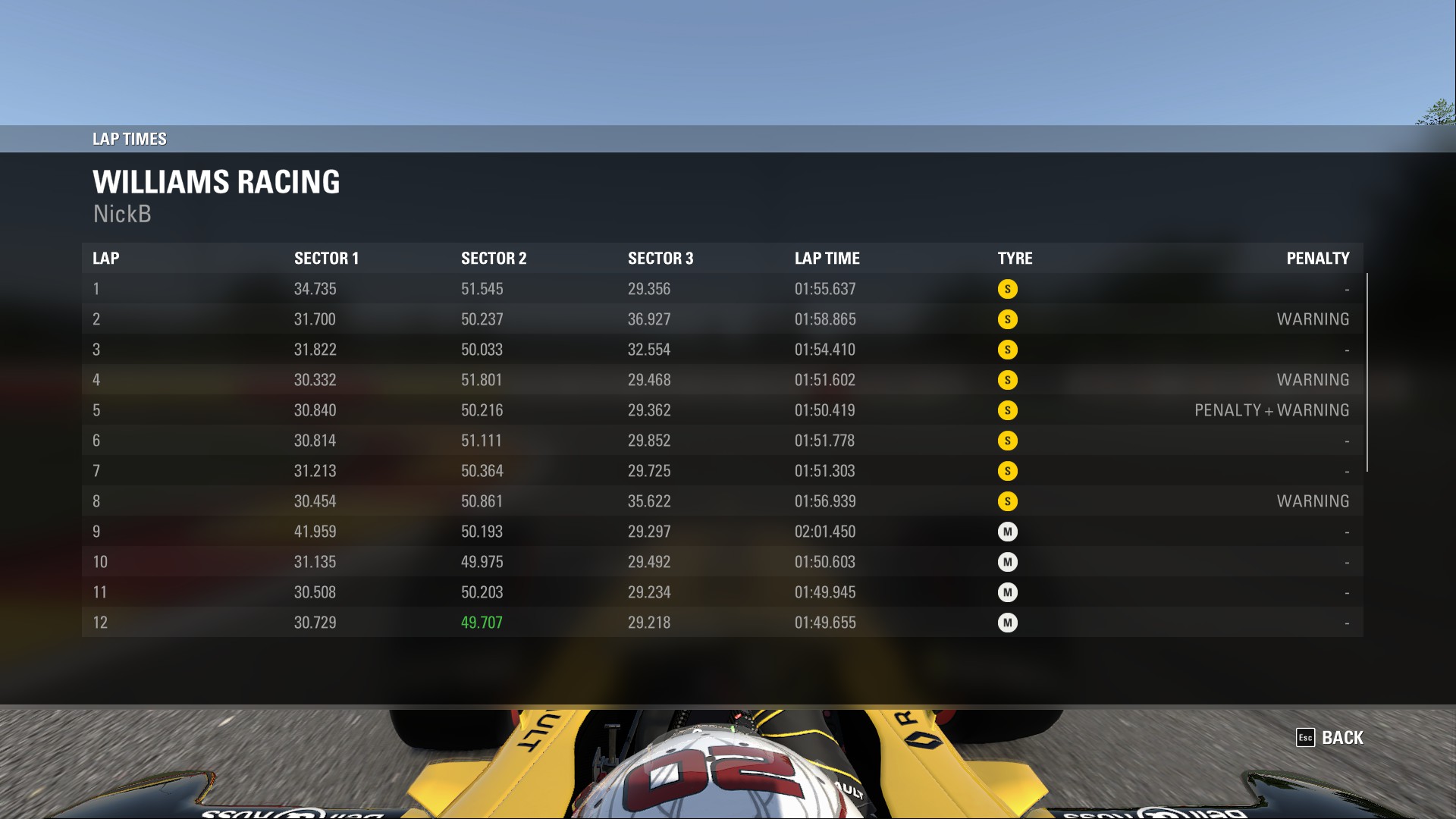 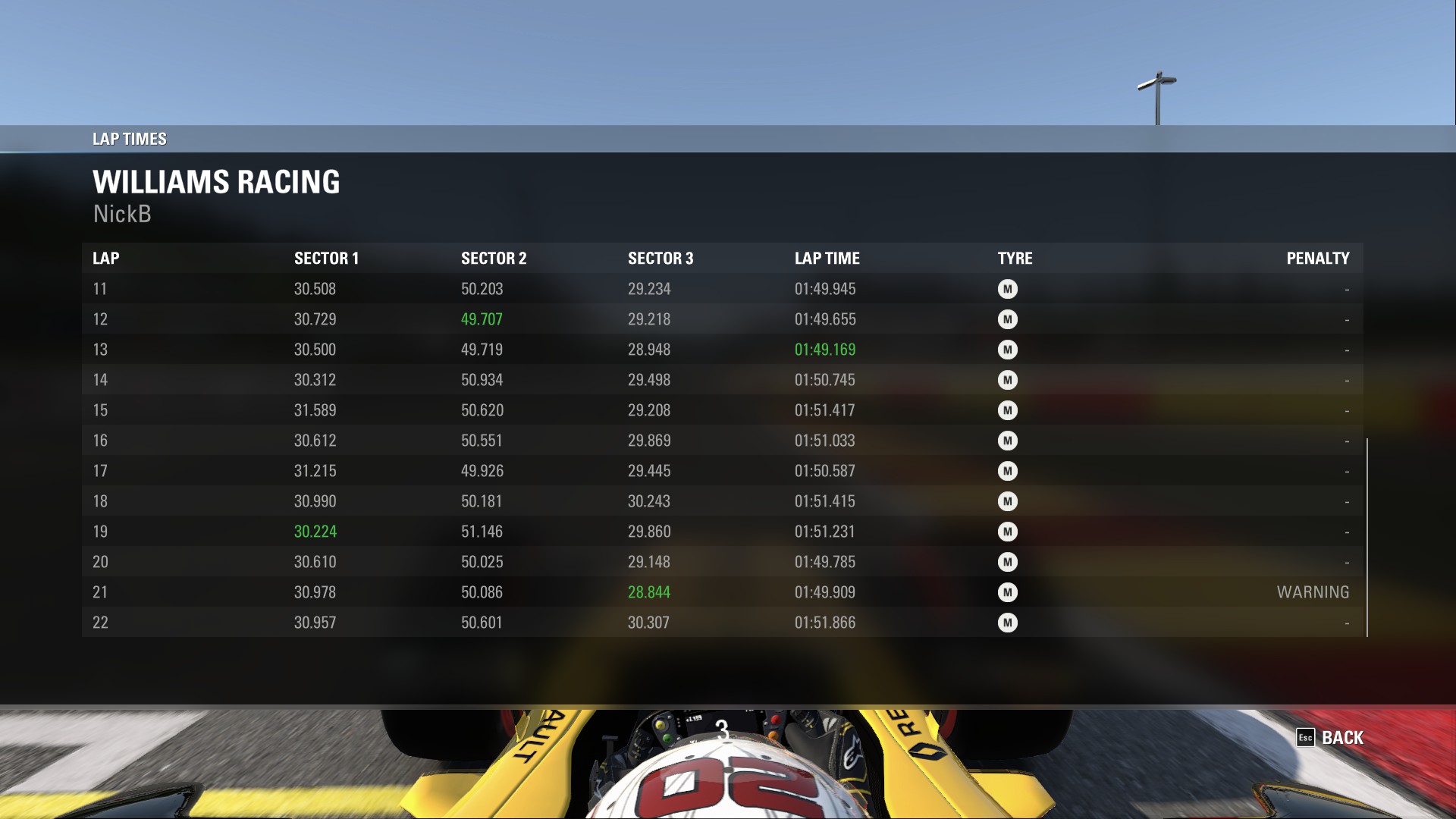 ● Race Report: Lobby 1
Qualifying Position: 6th
Qualifying Time:1.46.947
Finishing Position: 14th
** That race was insane, I don't think i've seen so many fast guys in a single lobby on this game as i saw today
Lap 1 had a great start this race, managed to avoid contact at turn 1. Until lap 2 La Source i got caught up in a max verstappen situation from this years Belgium grand prix( I was Max) Went for a gap that really wasnt there and nukka came across me not seeing me there and caused me to hit the wall and spin( My fault as i should of brake sooner). Had a great Battle with @Jens Maul @LnD @H_pro1 During the race which made it quite enjoyable. Even finishing basically last in 14th place, i had fun so winning isn't everything! Great job @TyranoTigger for winning and @FisiFan91 from 12th on the grid to take 2nd, goes to show your skill :stig:. Had a few incidents that compromised my race apart from the turn one incident with @Nukka Lap 12 i believe it was, in sector 2 on the double left after pouhon @NonRunner and nukka made contact and i have to maneuver aggressively just to try and avoid them whilst doing so nukka crosses over my line and we made contact and my hopes of a top 10 were ruined from that point on as my second stint became compromised, and soft compounds were ruined. Also had an incident with @H_pro1 where i was passing him on the kemmel straight, whilst doing so i move my car to the middle lane to attempt a slight squeeze defensive maneuver and my car became glued to him, so reckon lag was involve as i felt some serious FFB from my wheel once we touched. Probably could of left you bit more room there base on your footage so sry mate, beside that had a fun battle with you otherwise. Video below:


LAP 3: H_pro1 went up my inside due to my poor run off the bus stop due to my spin, locked up and pushed me off the track but no damage was done timewise. Passed H_pro1 later that lap. Adrenaline this time lost the rear end at the bus stop and I was collected there for a second lap in a row. Down to P13.
Click to expand...

@NickB Got sidepoded by @Jens Maul at the end of lap 3 and that meant u ran into my rear which caused you to spin. See my video for evidence.
Reactions: NickB

My full race video. I posted my qualifying and race director further up.
Reactions: AOR Adrenaline

Punisher said:
My full race video. I posted my qualifying and race director further up.
Click to expand...

THATS WEIRD Af what in the bloody hell is going on at the start?
[DOUBLEPOST=1474858194][/DOUBLEPOST]In lobby 1 we had an issue similar but it was on waiting on players screen.

AOR Adrenaline said:
THATS WEIRD Af what in the bloody hell is going on at the start?
[DOUBLEPOST=1474858194][/DOUBLEPOST]In lobby 1 we had an issue similar but it was on waiting on players screen.
Click to expand...

Not sure the lobby had some connection issues the first time we first set it up so I assume someone had problems with their internet or has a potato as it has never happened before that I have seen.

Punisher said:
Not sure the lobby had some connection issues the first time we first set it up so I assume someone had problems with their internet or has a potato as it has never happened before that I have seen.
Click to expand...

ahh i see, it was weird in my lobby as well. First time we get nothing happening in the waiting on players screen w/o a timer enabled. Possible bug but not sure

AOR Adrenaline said:
ahh i see, it was weird in my lobby as well. First time we get nothing happening in the waiting on players screen w/o a timer enabled. Possible bug but not sure
Click to expand...

Probably a bug can't rule that out considering all the other F1 games have been riddled with them.
Reactions: AOR Adrenaline

Punisher said:
Probably a bug can't rule that out considering all the other F1 games have been riddled with them.
Click to expand...