Platform + League: PC F5
League Coordinator: @Wesselll
Date: 15/9-2019
Members Involved: Myself and @Tiliad
Description: I was on the outside and he pushed me in the wall.

First off all It was never my intention to put Kaboom into the wall. I want to make that clear that is not how I race.

Sadly I did not record my POV because of lag spikes.

However this POV was kindly provided by Berci:

On that POV you can see all the events enfolding from an outside POV.
All the three incidents are my side/take on the POV that Kaboom send in regarding the incidents unfolding on lap 27 in that area of the track.

Incident 1: "Pushing Kaboom into the wall"
You can see that we were next to each other on track, we both try to make the corner, however I braked a tiny bit to late in a effort to stay ahead, (my fault but a honest mistake in the moment, the thought of crashing you out never ever came up...) I start understeering, causing me to hit your car for the first time mid corner (2:29 to 2:30), after that I kept understeering and I hit the barrier myself, sadly taking you with me. (I did hold my steering to the left for the entirety of the incident trying to avoid you, but I kept understeering...

I deplore this incident because it was not my intention to take you out. My apologies for the inconvenience caused.

Next incident: "launching it on my inside"
After that I tried to continue on as fast as possible and try to make the following corner because there were cars coming up behind me and I did not want a huge pile up, where everyones race is ruined. so I try to drive on as fast as possible. However you decide to launch it on my inside (I do not know why, if it was as a retribution I do not know and does not matter) but I was clearly ahead. From my POV you where very far back, albeit alongside, I should have left more space but I was still a bit shocked after the incident. And I had a lot of damage so I was not as quick as I was thinking I was.

Again I deplore this incident because it was not my intention to take you out. My apologies for the inconvenience caused.

Third incident with alfa romeo I am not involved in so I will not comment on that.


That was everything regarding on track however Kaboom did make some comments about my driving and other peoples driving (in this case to Berci) which I think are not necessary, I just wanted to put them here aswell. It seems that Kaboom is very upset about everything that happened in Monaco which I fully understand.

In the F5 Steam group chat: (hoping for me to get banned from AOR): 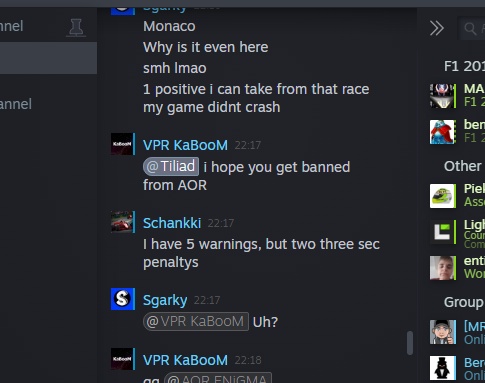 How I responded to him on steam: those were the emotions after the race @Tiliad

The stewards have looked at the evidence and have decided to depict the incidents separately.

We award @Tiliad with a 10-second time penalty and 10 penalty points for causing a moderate avoidable collision in Massenet. This was an aggressive move in a tight corner and led to a crash. Please be more cautious in future.

We award @Veloce KaBooM with a 10-second time penalty and 15 penalty points for causing a dangerous moderate avoidable collision in Casino Square. Attempting to re-overtake in that corner without a front wing was impatient and wreckless and could've led to a bigger crash.

Furthermore, we award @Veloce KaBooM with a 10-second time penalty and 25 penalty points for the crash at Mirabeau. This was appauling driving which was clearly caused by frustration - you don't brake there ever, let alone without a front wing. AOR does not accept these driving standards.

Finally, @Veloce KaBooM will be given a reprimand for poor attitude towards a fellow driver. We do not tolerate this behaviour.

From these incidents, @Veloce KaBooM accumulated 40 penalty points, meaning he will have to serve a race ban at the Canadian Grand Prix. Furthermore, for accumulating 25 penalty points, @Veloce KaBooM will have to serve a qualifying ban at the next race that he enters. Treat this as a final warning - your actions in this race were not acceptable, and your position in the league will come under review if you continue in this manner.