This thread contains general information about the AOR F1 Leagues on all platforms (PC, XB1 and PS4), such as league structure, assist restrictions and lobby settings.

General Information:
● League setup: Each platform runs a set amount of leagues, depending on the amount of drivers signing up at the start of the season. The leagues are tiered, with the aim to have the faster drivers in the higher leagues and the slower drivers in the lower leagues. There is also some tiering based on assists.
● Race format: Each race event features an 12-minute qualifying session followed by a 50% distance race.
● Driver placements: Drivers will be placed in an appropriate league based on their time trial times, their performances in the previous league season (for drivers who raced in Season 14) and their performances in the mandatory evaluation race (for new drivers).
● Day/time: All league events will take place on Sunday nights from 8:00pm (UK time).

Detailed Information:
Below you will find more detailed info about the leagues. Click the links below or scroll down to get to a specific part of the thread.

Who to contact
● Overview of the members involved with running the leagues
Last edited: Mar 25, 2018

For the sake of fairness, the Assist Tier has a separate sign-up thread to ensure that drivers who race without TC & ABS are not mixed with drivers who use these assists, seeing as they directly affect the performance and handling of the car.

The below graphic shows the current tier structure and which assists are available to be used in each.

Note that the amount of leagues in the Middle Tier & Assist Tier will depend on the amount of drivers signing up at the start of the season.

This structure applies for every platform - PC, XB1 & PS4*. 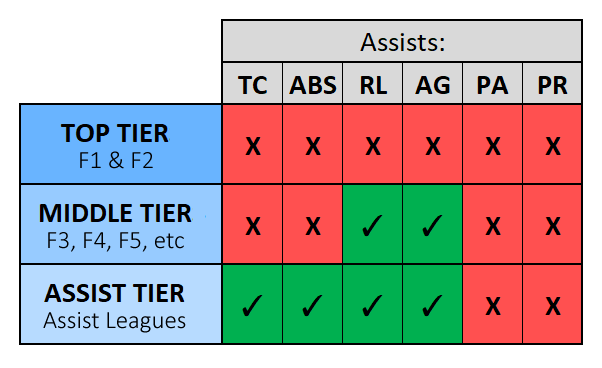 When setting up the leagues for a new season, we always aim to make the leagues as close and competitive as possible, by placing drivers where they best fit into the league structure.

There are no fixed promotion & relegation spots, meaning it's up to the league coordinators to make a determination on the placements, with the intention to make the tiers as competitive as possible.

All drivers will be placed in a suitable league based on various factors; the Time Trial event held as part of the sign-up process, league performances from the previous AOR season, and (for new drivers who sign up at the start of the season) performance in the evaluation races.

Drivers may choose to either sign up to the main leagues, or to sign up to the assist leagues where Traction Control & ABS is available to be used. These will be separated, meaning no drivers without TC & ABS will end up racing against drivers who use these assists.

Each league will generally allow a full grid of 20 drivers (plus reserves).

It is possible for new drivers to sign up while the season is ongoing. They will still have to complete the regular sign-up template and time trial event, and will then be placed into an appropriate league based on their pace. However, drivers will only be able join mid-season if there is a space available in an appropriate league. If there isn't, they will be placed into a league as a reserve driver - or on the waiting list - until a space opens.

Drivers who are assigned to a league as a reserve driver will not have a guaranteed spot in the league races, but will be able to step in to race in place of any no-showers.

Reserve drivers will not be visibly listed in their league's championship standings. However, the table keeps record of their points in the background, so that if they later get promoted to a main race seat (if one of the main drivers pulls out or is removed), points scored during the reserve driver period will be added to their total points count.

Reserve drivers can choose to race with any of the cars that have been left open by a no-shower, however since they are not a permanent part of a specific team, the points they score will not count towards the Constructor Championship.

Unlike main drivers, reserve drivers are not required to be online at the time of the races, but this is obviously appreciated. Keep in mind that reserve drivers who are inactive for a lengthy period of time (eg. frequently not being available to fill no-shower spots despite such spots being available) may be removed from the league. It's a good idea to keep an eye on the league forum before the races to see if any no-showers are announced.

If a main driver spot opens up within a league, that league's reserve drivers will be first in line to fill that spot (in order of who has been a reserve the longest).

Note: We will not be accepting drivers signing up with the intention to be a permanent reserve. Drivers who are not able to race regularly may take part in social races as an alternative.

Drivers may be moved between leagues while the season is ongoing if it's clear that they have been misplaced. This could be that they are clearly too fast for their league, or that they are unable to experience close racing due to being too slow.

If a league ends up in a situation of severely lacking driver numbers, appropriate drivers from the league(s) below may be asked to move up to balance the numbers.

Preferably we want to avoid having to move drivers between leagues against their will, but in extreme situations this can be a necessity for the sake of keeping the leagues competitive or sufficiently filled up. In the event of a driver being moved to a higher league with tougher assist restrictions, the driver will have to adapt accordingly.

Cars and teams will be decided individually within each league at the start of the season. When the car selection begins, a thread will be created within each league's forum section with more information about how the process is carried out.

The order in which the drivers will pick their cars within each league is decided based on the below priority list:

The drivers who end up in the same car will form a teammate pairing and represent their team in the Constructor Championship.

The car selection process concludes when all drivers within the league have a car and teammate assigned.

Once the first race has taken place, no car changes will be allowed at any point during the season. Intentionally using the wrong car in an attempt to benefit yourself or others in a race will see you disqualified from the results of that race.

If a new driver joins the league at a later stage of the season, they may pick any car that is available at the point of being assigned to the league.
Reactions: Schalk

The following lobby settings will be applied for the official league race sessions.

*The race at Bahrain will use Midnight
**The AI Driver Level may be adjusted individually within each league depending on the general pace of the drivers.
***The safety car will continue to be turned off as long as there are risks of instability/inconsistencies with when and how it is being deployed, and other bugs.
****The Formation Lap function will be turned off due to some reported bugs it may cause.

Assist Restrictions are dependant on the league's tier - refer to the tier structure here.

Notice: We ask the lobby host to not save these settings, but instead manually apply them in the race lobby each week, due to a reported bug that loaded settings may produce a near identical weather pattern every round.
Last edited: Mar 23, 2018

The following points will be scored for each race finishing position.

● DNF:
Drivers who complete less than 90% of the race distance will be classified as DNF (Did Not Finish) in the race results, and will score 0 points regardless of their final position.

Drivers who complete more than 90% of the race before accidentally crashing out or getting disconnected (without re-joining the session to resume control of their car before the end of the race) will be classified as a finisher, but will only be credited with the amount of laps they completed in control of their car, even if the driver's AI car makes it to the end. Points will then be scored as per the system above.

● DSQ:
Drivers who get disqualified from a race - whether that be due to an in-game penalty or post-race disqualification via the stewards panel - will be classified as a DSQ (Disqualified) and moved below all other drivers in the results.

If a driver is classified as DSQ within a points scoring position, they will score 0 points for that position regardless of race distance completed.

● DNS:
Active league drivers who did not attend the race will be classified as DNS (Did Not Start), and will not score any points.

Championship standings:
● Drivers and constructors are ranked in the standings based on how many points they've scored over the course of the season.
● If two or more drivers or constructors are tied on points, the higher place in the standings will be awarded to the holder of most first places. If the number of first places is the same, the holder of most second places, then third places, and so on until a winner emerges.

The following members are currently part of the team running the AOR F1 Leagues: