This thread contains general information about the AOR Formula Leagues on all platforms (XB1, PS4 and PC), such as league structure, assist restrictions and lobby settings.

League Structure:
● Amount of leagues: Each platform runs a set amount of leagues, depending on the amount of drivers signing up at the start of the season.
● League setup: The leagues are tiered, the aim to have faster drivers in the higher leagues and the slower drivers in the lower leagues. For season 1, driver placements will be based on a time trial event.
● Cars per tier:
Tiers will be filled from top to bottom, with one league per tier. The top league will be driving the Formula B car, with the lower leagues driving the slower formula cars, as follows:
- Tier 1: Formula B
- Tier 2: Formula C
- Tier 3: Formula Gulf
- Tier 4: Formula Rookie
● Race night format:
- Qualifying: 15 minutes
- Warmup: 5 minutes
- Feature Race: 25 minutes (approximately)
- Sprint Qualifying: 5 minutes
- Warmup: 5 minutes
- Sprint Race: 15 minutes (approximately)

Detailed information:
Below you will find more detailed info about the leagues. Click the links below or scroll down to get to a specific part of the thread.

The Formula leagues are built up of 4 tiers, with each tier using a different formula car, as follows:

Each tier is intended to contain one league, but more leagues may be added to certain tiers depending on the amount of drivers signing up at the start of the season.

All leagues have fixed promotion & relegation spots which come into effect at the end of the season, based on drivers' finishing positions in the championship.

Whether it will be possible to fully adhere to this system will depend on how many of the league drivers carry over to the following season.
Last edited by a moderator: May 23, 2015

The AOR leagues favour drivers who race without assists enabled. You need to be able to drive without ABS in order to race in our Formula leagues. Only the bottom tier allows Traction Control to be used.

The tables below demonstrate what assists are allowed/banned in the leagues on each platform (in the event of 4 tiers): 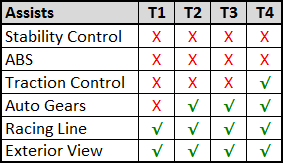 Note: Racing Line is allowed in all tiers only because there is no lobby setting to restrict it.

The following lobby settings will be used for the Formula league races.

*We will be keeping it simple with the weather and race time for the first season, however we aim to include dynamic weather and potentially sunset/night races for future seasons.

**With the game currently quite unstable with regards to game crashes and disconnections, we feel adding mechanical failures would unnecessarily increase the chances of drivers having their races end through no fault of their own. This setting may be turned on for future seasons however.

***We feel the in-game penalty system is currently too inconsistent when enforcing the track limits. Bugs have also been reported of drivers receiving ridiculously excessive time penalties. Therefore we will be relying on our manual stewards panel to deal with any incidents for now.
Last edited by a moderator: May 24, 2015

Which car is available to use in each league is dependant on the tier it belongs to (see the overview of the tier system above).

At the start of the season, after the leagues and driver placements have been announced, a thread will be opened within each league's subforum where livery selection will take place.

Drivers will be selecting a livery in order based on their combined lap times from the time trial event.

Each livery can be selected by a maximum of 2 drivers. Drivers who select the same livery will be classed as "teammates" in the Team Championship.

After the livery selection process has finished, drivers are obliged to stick to their chosen livery for the full season.
Last edited by a moderator: May 23, 2015

The following points will be scored for each race finishing position in the Feature Race.

The following points will be scored for each race finishing position in the Sprint Race.

Each driver's championship position is based on their total points scored throughout all of the season's races.

Each team is made up of two drivers using the same car livery. The team's position in the Team Championship is based on both drivers' total points scored throughout all of the season's races.

● If a driver loses connection during qualifying, they will be invited back into the lobby to continue from where they left off.

● If a driver loses connection during the race, that is tough luck, and unfortunately nothing can be done about that.

● If 4 (or more) drivers lose connection to the lobby during the transition from qualifying to the race, the lobby will be restarted and the race will be started with a manual rolling start, where drivers will use the first lap of the race to line up in a double file formation based their qualifying positions. Proper concentration and cooperation from the drivers are required to make this work.

● During the race, if half (or more) of the drivers in a race lose connection at the same time, or over a short period of time, that counts as a mass disconnection.

The following members are currently part of the team running the AOR Formula Leagues: