A quick walkthrough about the changes in the upcoming 1.0 release.
Long version (TL;DR; in the end)

With 1.0, we (finally) apply the last stage of the Competition Rating (CP), which is the big brother of the known Racecraft Rating (RC). RC was designed to represent the relative strength we need for the "user-server-assignment" without many of the negative aspects of a ELO based performance rating. Those negative effects tend to deter users from participating in races, which is the opposite of what we want to achieve. So RC for example more or less ignores starting races from the back, or spinning, having damage or leaving a race. 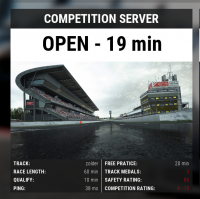 The Competition Rating is completely different in this aspect, and is result oriented in a merciless way - exactly how real motorsports is. Once you enter the Qualifying session on a CP server, your Rating is on stake. Leaving or "mechanical issues" (including errors, connection issues, hardware failure) will unrecoverably put you at the back of the field. In the end the only relevant facts are: Who finished in front of you? Who finished behind? In the result, your CP Rating will raise (or fall) and reflect your performance. Understanding the conditions, reading the race, keeping out of trouble, consistency, strategy (and sometimes gambling on slick tyres

) will define your success as much as your raw pace.

The CP servers will run a 20 minute Free Practice session, where drivers can join and collect. You are free to join and leave during this phase. Once the 10m Qualifying session starts, the session is locked - there is no way to come back. A long formation lap introduces the 60 minute race session; then the event starts out again and users are free to leave/join again (session durations are subject to change according to experience and feedback).

Additionally, CP servers will run (fairly realistic) dynamic weather conditions, and default to any "hardcore" option that is available in Multiplayer at a time. So far the biggest differences are
- full formation lap
- long race session
- (massively) increased BWP penalties for accidents
but we will keep on adding interesting things as they are implemented and considered stable in Multiplayer.

Being special "non"-scheduled pickup servers, we will try to setup the server in reasonable CP brakets so there is a reasonable amount of available servers matching the traffic we see there. As everyone starts out with 0 CP, we will find ourselves in a special situation during the first few days - many 0-10 CP servers, and one in the remaining 8-100 CP. Once we find more drivers above 10 CP, we will insert more brackets accordingly to the numbers and activity. The goal of those spans is to protect lower CP drivers from being helplessly stomped by very quick drivers; and spend capacity on "high profile" servers so alien drivers find themselves in highly competitive races. All CP servers will additionally run 3 Track Medals as requirement, plus a fairly high SA requirement (think of 80-90).

The future development of those CP servers strongly depends on the popularity. We see different options, but first we need to observe how the feedback is and what numbers we face. This also applies to region coverage, we will start with high gravity on Europe and two servers in the US.

Unlike other ratings, both performance Ratings will unlock once you get past 50 Safety Rating (SA). RC becomes more of a background Rating now, both promoting the focus on the Competition Rating and allowing us to do the important things for the determination of relative strength without distracting users too much.

Since the discussion has been very intense on these points, we want to be even more clear on what multiplayer and MM have been intended to look like. A click on "Multiplayer" will now open a new Multiplayer headquarter which has a Quickjoin button for Public MP, access to the suggested Competition Server. Additionally you can pick your car, access the quite important weight settings, or open the "old" server list. 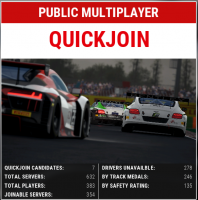 (don't worry about the numbers and wording, we're not done here)

For Public Multiplayer, the amount of cars that can run on a server now depends on the safety related restrictions that are set up. Unrestricted servers now start with 10 slots, and gradually increase with a simple formula:

In other words, each Track Medal is worth a slot (yes please use them) and the SA rating gradually unlocks more and more slots - at fairly low 45 SA we will find the break even to the 24 slots we are used to. Going beyond, 70+ SA will unlock the new maximum of 30 car slots.

The data clearly indicates that racing in a populated unrestricted server doesn't deliver a realistic chance to survive the start of a race, except they aren't fully populated. In the same moment we see drivers who want clean racing cannot stick with the decision to join low population SA servers - and ironically even server admins are tempted to offer unrestricted servers despite their hopes for good and clean racing.

In a nutshell, we hope to see many more servers picking up Rating requirements and offer a broad band the server selection algorithm can work with. Unrestricted servers may become cleaner, while there's no doubt that the SA rating is a target to maintain in order to get driving with more cars.

For league and server admins: 1.0 servers now support entry lists, which seamlessly transform public pickup servers to the equivalent of AC1 booking servers.
You can add user SteamIds to this list, which opens a few special options. For example, you can
- Override the name
- Override race number
- Override the PRO/AM/SILVER car category
- Override the style the appearance* of the driver, helmet, suite
- Define teams (see 5) )
- Force a car model; users still define the appearance, but can only join in the defined car model
- Override the car model + appearance* : regardless with what car the user joins, the server wins
- Elevate drivers to admins automatically

*appearance is not yet a supported feature

Everything in this list is completely optional and can be turned on/off for each entry.
Additionally, entry list entries bypass rating requirements and client limits (unless there is no physical pit slot available). That way, server admins can always join their servers; or small league-like groups could run their races on public MP with insane SA requirements, and be happy about drivers with e.g. 99 SA can join them.
We will provide a quick overview in the server admin thread, and prepare a sensible documention during as soon(tm) as possible.

Given more teams configured in the entry list, the first driver to join the server will obtain control over the team car. When team mates join, they will be spectators instead; and the active driver will be updated about the connection status of his teammates. Using the Pitstop MFD, he now can assign the next driver just like in Singleplayer races - the swap will automatically happen during the next pitstop.

Server admins, please pay attention to the "spectatorSlots" - having driver swaps may easily double the amount of connections needed during the pitstop phases.

Wait, did you say "Spectator"? Yes, server admins now can setup both the amount of available spectator slots and a spectator password. Joining a server via the (old) server list using the correct password will join you as Spectator without car. You will be able to broadcast, chat or even use race director commands (see 7).

Attention: Driver swap connections are not supposed to use the spectator mode password; they should try to join "regularily".

This will be an ongoing process, but for now server admins can already use:
/dq <racenumber> : Instantly disqualifies this car, teleporting it to the pits
/clear <racenumber> : Clears all open penalties, ie. Drivethrough or StopAndGo

9) Return of the broadcasting API

The broadcasting code was ported to the refactored code, luckily without too many substantial changes in the API, including a few bugfixes and new events.

While the menu is open (= before clicking "Drive"), we now see improved information about the session ahead - and a Countdown indicating the time until the formation lap starts.

TL;DR;
1) Competition Rating is now active, and introduce a new "Competition Server" type. Given quite high SA requirements, you can join those servers to compete with other users in more serious races.
2) The Competition Rating (CP) now unlocks with Racecraft Rating (RC), no need to grind 50 RC in order to compete in the new Competition servers.
3) New "Quick Access Multiplayer Menu" - Quickjoin into Public Multiplayer, enter the Competiton servers - or advance to the old server list.
4) Max server capacity changed: It now linearily depends on rating requirements set up for this server. 45 SA equals 24 cars, 70+ SA can run 30 cars.
5) Entry list options for server admins and leagues.
6) Teams and corresponding driver swaps can now be configured by server admins.
7) Specator mode is now active: Server admins can setup spectatorSlots and the password to use, which joins a server without car.
8) First Race director commands.
9) Broadcasting API is active again.
10) Better information about session and countdown during race preparation phase.
You must log in or register to reply here.
Share:
Facebook Twitter Reddit Pinterest Tumblr WhatsApp Email Link
Top Bottom