Q-15th
R-12th (11th before penalties)
Such a competitive race this time. Could battle with most middle field up to second stint. Due to damage front right wing, had to stop a bit earlier. Managed to undercut @ChokDK but later he overtook me. @Minwasko made this race really interesting. So fast on straights couldnt do much as well the pressure behind. Many cars went out in front and behind so had some battles while they took their places back. At the middle of the race i thought of first point maybe but @ChokDK went to 1 stop and @Scott_Aitchison was really fast in last 10 laps. Really amazing race!
Reactions: ChokDK

Span first lap, fml. Going from the quali into the first lap felt so awful, first the insane lagg at the lights made me start like 0.5 sec later and then it just felt like driving on ice.

Bottled Q - I could have been a second quicker according to my last practice - but 10th was still a great result for me. The race was pretty damn good fun. I had a rocket start, and just about held it for a short while, but I simply couldn't brake cleanly for the hairpin - eventually dropping me down a few places. Once I'd adjusted my settings it was sorted, and all I could do was try and keep my pace up. Ditching the melted Softs helped on lap 4 and the Hards performed pretty well - I knew I could push them pretty far, switching to another fresh set of soft for the last 7 laps. Felt really good to see a fastest lap (been a while) although it didn't last long In fact, it was great to see the finish (also been a while) and equal my best finish of the season.

New wheel definitely helped, and it's boosted my confidence for possibly coming back for another season some time in the future.

Apologies to @ChokDK in Q, my MFD controls were screwed up and I was trying to fix them, when you arrived at the scene. I'll take the penalty for it next time I race.
Reactions: ChokDK

Q-17
R-11
My new best result.Bottled my race on lap ~4-5, went for 10 laps with yellow wing. Thanks to @EdCherie The last stint was very exciting.
@StevieSQ sadly, I might be leaving this league because it is really hard to cope league racing with school, I will let you know on Saturday, if I am going to be leaving or not.
Reactions: EdCherie

Q-7th
R-10th
Horrible qualifying today, first 2 laps I made mistakes on so I did a careful final lap, i think I could have gone few tenths faster. Race start went ok, but then went wide and spun as I was coming back on track, sorry to @Tomspeedx30 and @H_pro1 for affecting their races. A few laps later I spun again and damaged my front wing, the car felt like it was on ice in the first few laps. I was still able to do my preferred strategy, which worked out well. For the rest of the race, I was pretty much on my own, only positives I can take from today is that I scored a point and I set the fastest lap. Still not an enjoyable race though, I haven't enjoyed a race since Austria, hopefully the last 4 races will be fun. My POV is below: 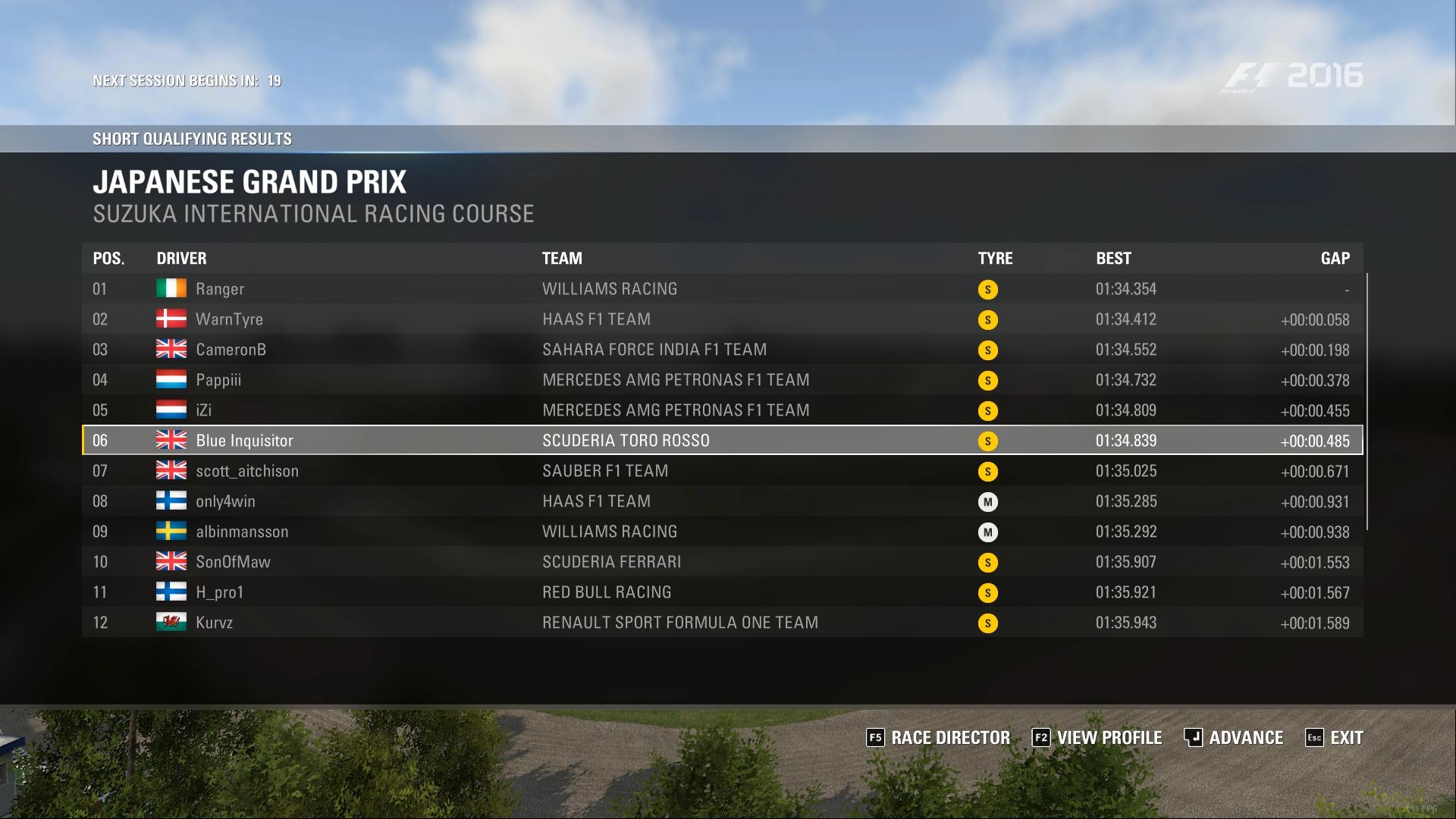 I don't have the results for 13th to 17th, so if someone could post those I'd be grateful. 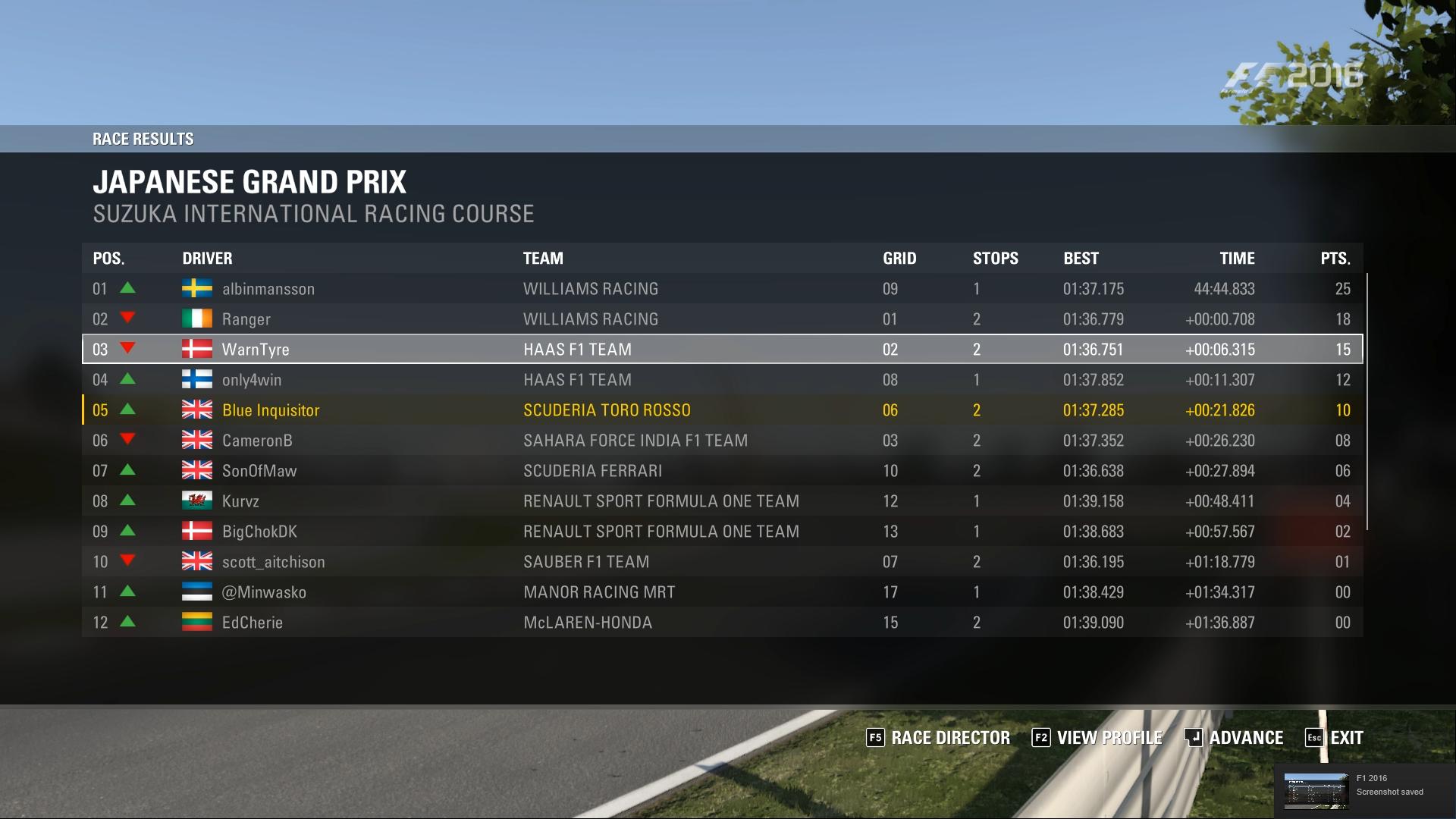 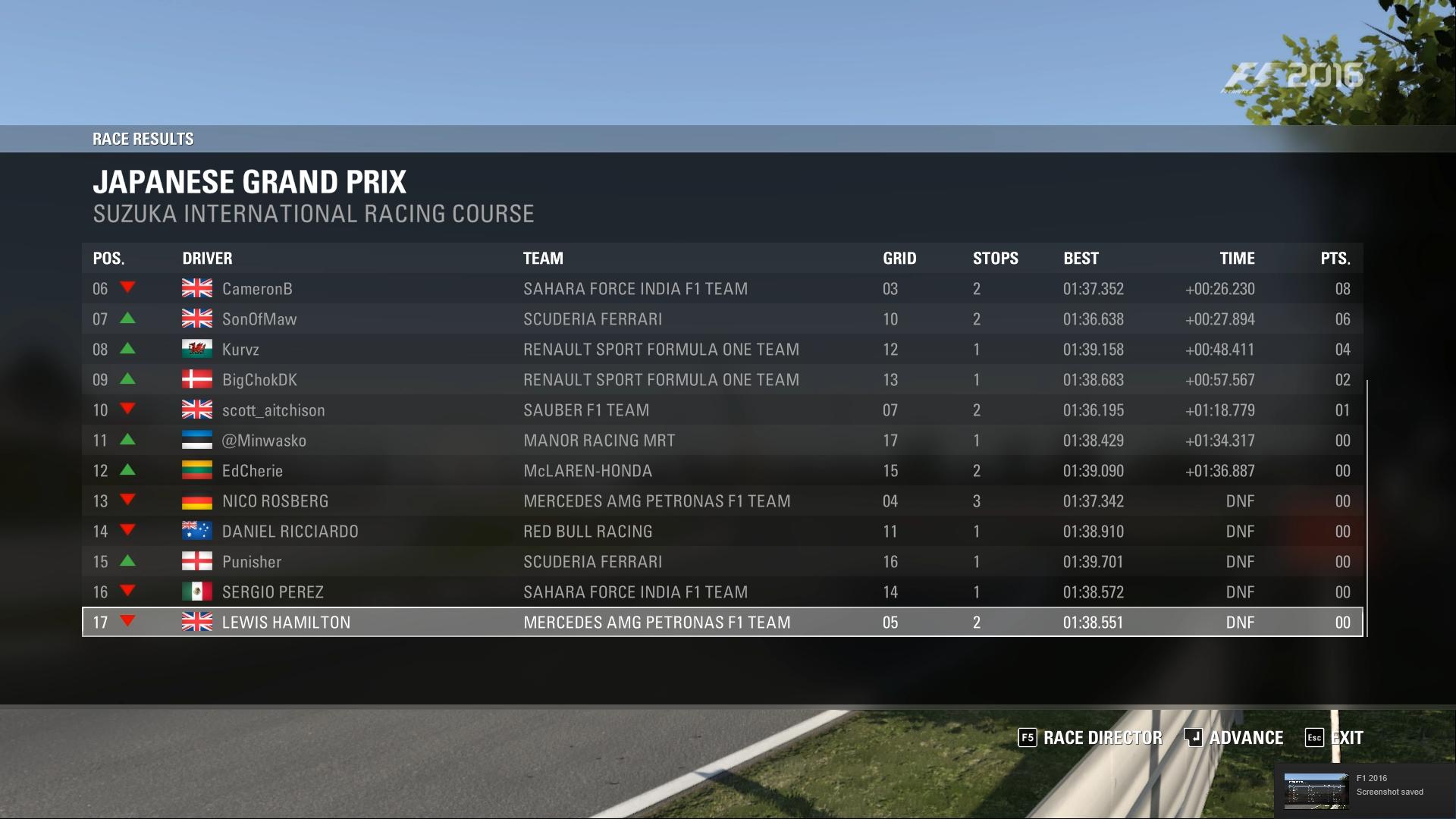 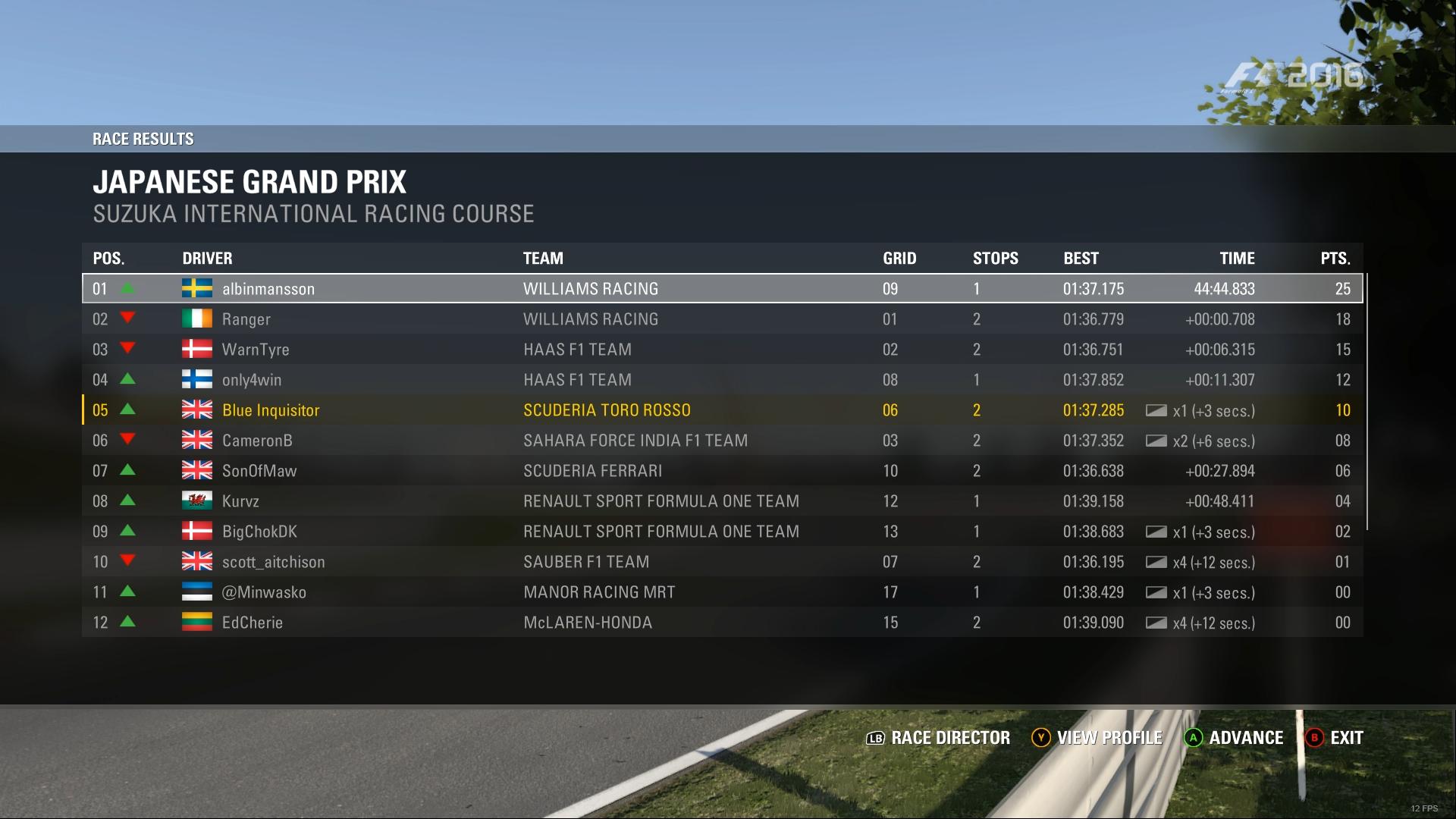 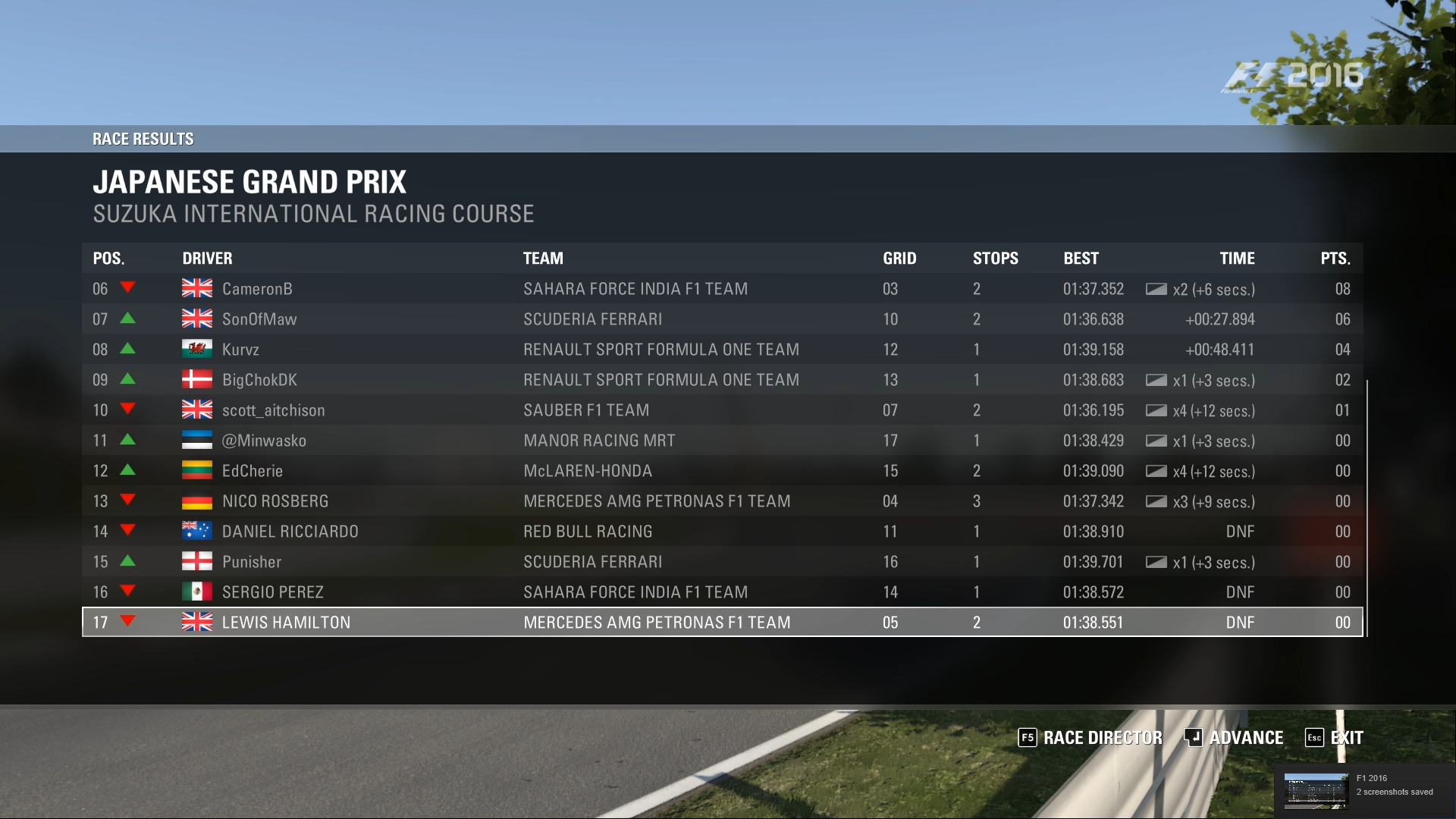 I don't have the results for 13th to 17th, so if someone could post those I'd be grateful.

Legend. Thanks for codding. <3

Qualifying was a pain, my first lap was rather slow, 2nd lap i hit a wall and then corner cut my on 3rd but thankfully my 4th attempt was good.

@Blue Inquisitor here is the screenshot you are missing. 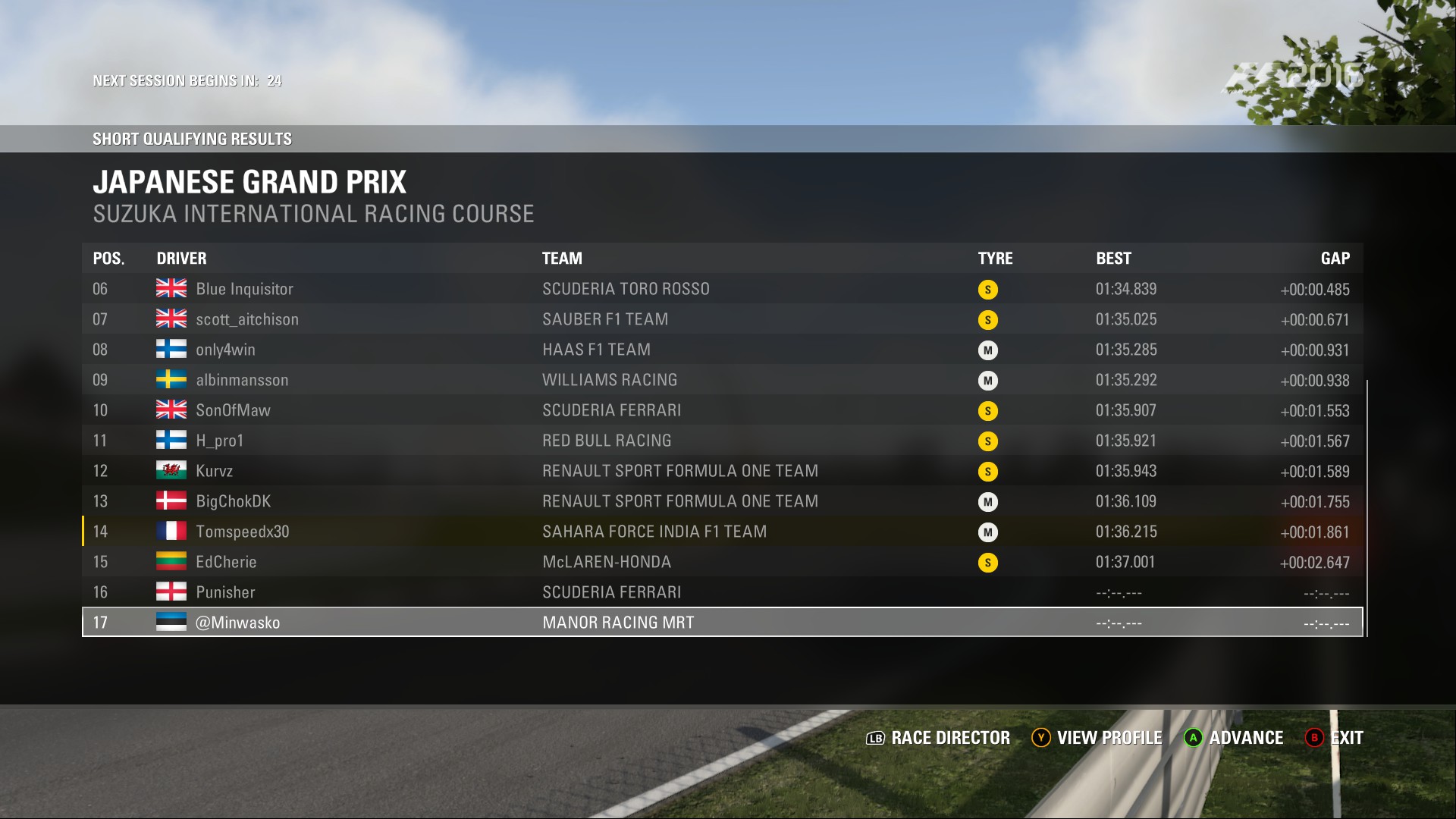 Q : P14
Despite being my fastest lap on medium in qualifying, it looks like it was pretty poor compared to the others lol

R : DNF
I had an OK start and I was up to P11 in lap 2. I was following a big train of cars on medium which was good for me and I got involved in an unfortunate incident on lap 2 which made me spin and sent into the wall with a damaged front wing.
Had to pit and and I tried to fight back to get some points. I was up to P13 close behind P11 and P12.
Lost the rear end at the exit of the Spoon curve and stuffed my car into the wall on lap 12.
Race to forget for me. Hoping for some better races for the last 4 rounds

A shocking qualy result in that I didn't think pole was possible at all. I had so little time to practice this week and with my Birthday I had no time at the weekend but I managed to get in for a few laps and sort a setup out.

Setup was geared at cornering and not straight line speed and this punished me when the tyre's started to wear. I was able to hold @WarnTyre back during the first stint but during the second he got past me and was pulling away on the straights. I was then able to take advantage of his and @only4win crash which put me behind @Albin Mansson. Albin had a slight spin which let let get right behind him but unfortunately the straight line speed wasn't there to take him and thought of a risky move into turn 1 to take the lead on the 2nd last/last lap but decided against it and made sure the 2 Williams came home 1 - 2.

I badly want to win the remaining races but can't afford to take unnecessary risks so have the targets set out and will aim for them every race and hope my first AOR Title is this Season.
Reactions: SonOfMaw, Albin Mansson and WarnTyre

Q: P2
R: P3
So this was a pretty shocking qualifying for me. But I must have found a good setup due to my grid position after the race. It was certainly not my practice.
My setup was geared to be fast on the straights, as you cannot overtake in the corners on this tracks without the risk to crash. This helped out a lot in the race, and help me even more in the battle for P1 against @Ranger as he had the opposite setup.

Race started out bad. Due to the great game of F1 2016, I got some extreme lag just before the start. I dropped from P2 down to P4 behind @Pappiii in a few seconds, until I overtook him again up the inside into the first corner, were I found myself in P3 behind @CameronB in his Force India. I overtook @CameronB at the end of sector 2 into the corner "spoon". I was in P2 again. @Ranger was 3 seconds ahead... I'm going for the win.
Cutting to lap 5, I had caught up and was 0.2 seconds behind him, but we both choosed to pit. He (of cause) rejoined in front of me again, but on the mainstraight (going onto lap 6) I overtook him clean with DRS.

I pitted again (last pitstop), and rejoined in P4. @Ranger was out of my thoughts as I pulled out a 6 seconds gap to him. And now it was time to overtake people that was doing a 1 stop. They were on really worn hard tyres, and I was on fresh hard tyres... Should not be that hard right?
I overtook @Punisher pretty easily as he could not defend on his worn out tyres. I was now in P3.
I catched up to @only4win in P2 and @Albin Mansson in P1.

And then I crashed out with my teammate @only4win. (still love)
I dropped down to P4, and @only4win to P3, and then @Ranger overtook us both and got P2.
The next lap I overtook @only4win in a pretty overtake.

You can see the highlights here in a little nice edit I made!

Didn't have great pace in the race, but I had a lot of fun battling Pappiii for basically the whole race. We overtook each other quite a few times, it was good, clean racing.

(Nothing really happened in the first stint!)
Reactions: ChokDK