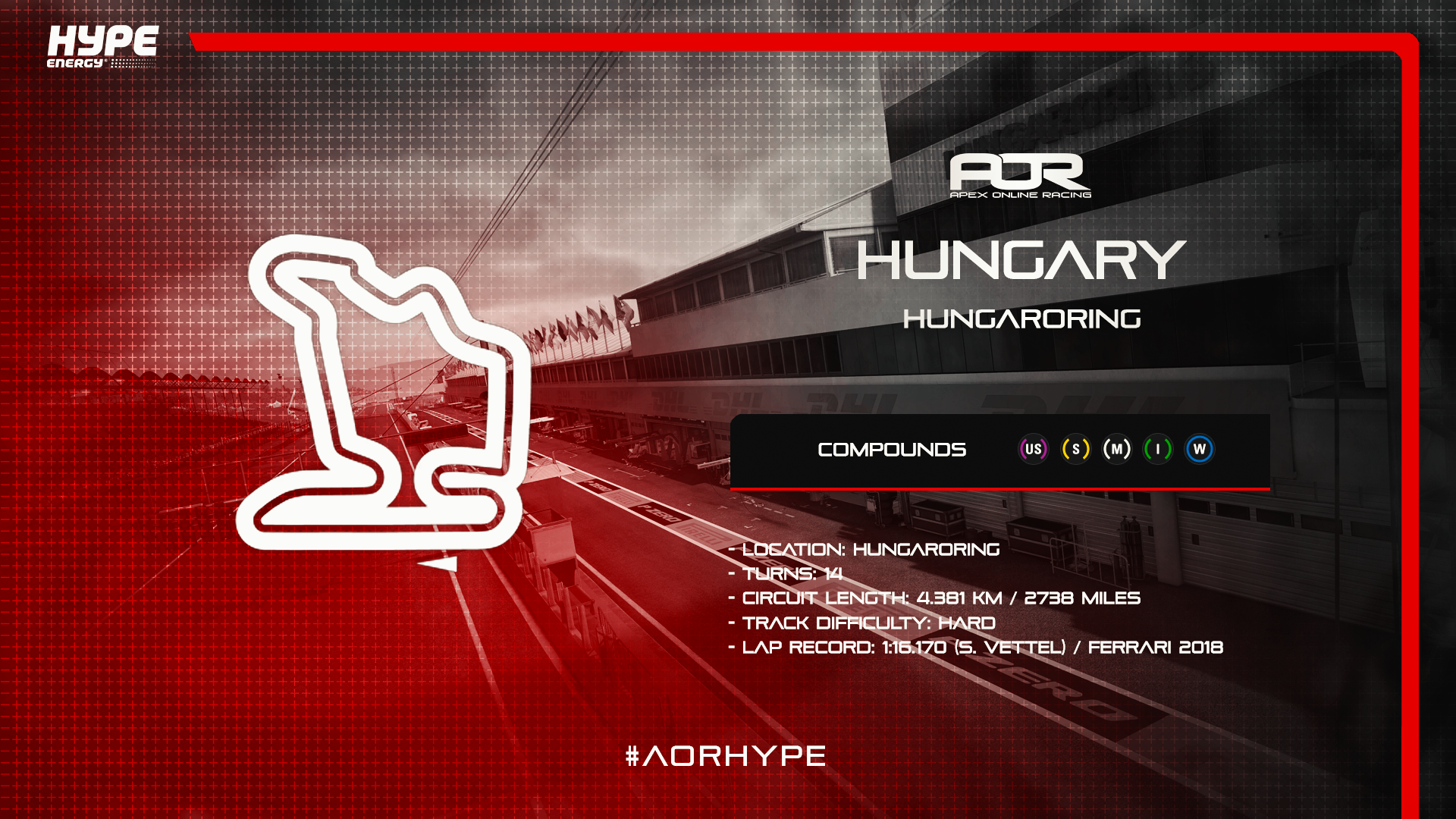 Unfortunately I will not be able to race tomorrow. These last couple of weeks have been difficult for me and I have no time to race. I am sure next week will be better.
Sorry guys. Good luck!

today I can not run because of problems with the wheel, sorry guys and luck in the race

Overtake of the Week Submissions are now open;
https://apexonlineracing.com/community/threads/overtake-of-the-week-hungarian-grand-prix.51406/

First of all, sorry again for the delay in starting! I had literally just been online moments before, so I have no idea why it was playing up!

Qualifying
Started by setting a banker lap before going for it properly on the Medium and Soft. Finished qualifying P14 with a 1:17.198.

Race
Opted to start on the Mediums and just managed to avoid the big crash after T1, which allowed me to climb into P11, soon to become P10 after the first lap. I wasn't able to chase down @TheogGR1 who was on the Soft tyre, but I was able to fend off @Nexus1011 up until Lap 7, who made the move when I wasn't actually expecting it at T2 haha, so I had to turn away from the corner to avoid. I was able to stick with him but not able to get back past. He pitted Lap 18 while I pitted Lap 21.

I exited just ahead of @Alex Shield but was passed at T2. After my tyres were up to temperature, I was able to fight back and on Lap 24 reclaimed the position of P10. Unfortunately, I then found myself now around 8.5 seconds behind @Nexus1011... I wasn't able to catch up, but I was able to close the gap down to 4 seconds which I then found that without my penalty, I'd have claimed P9 from him... Ah well.

Overall from what I remember, it was an okay race with the constant pressure from @Nexus1011, as well as the goal to catch back up at the end. Another points finish to add to the list, so a success in that sense. Hopefully next race I won't have the issue joining the lobby!
Reactions: Nexus1011

@SolidNinjaSnake yeah i had to dig deep there to make a move on this track...that was really tight there but i made it stick so that was nice.
Good clean battle overall!
Reactions: SolidNinjaSnake
You must log in or register to reply here.
Share:
Facebook Twitter Reddit Pinterest Tumblr WhatsApp Email Link
Top Bottom