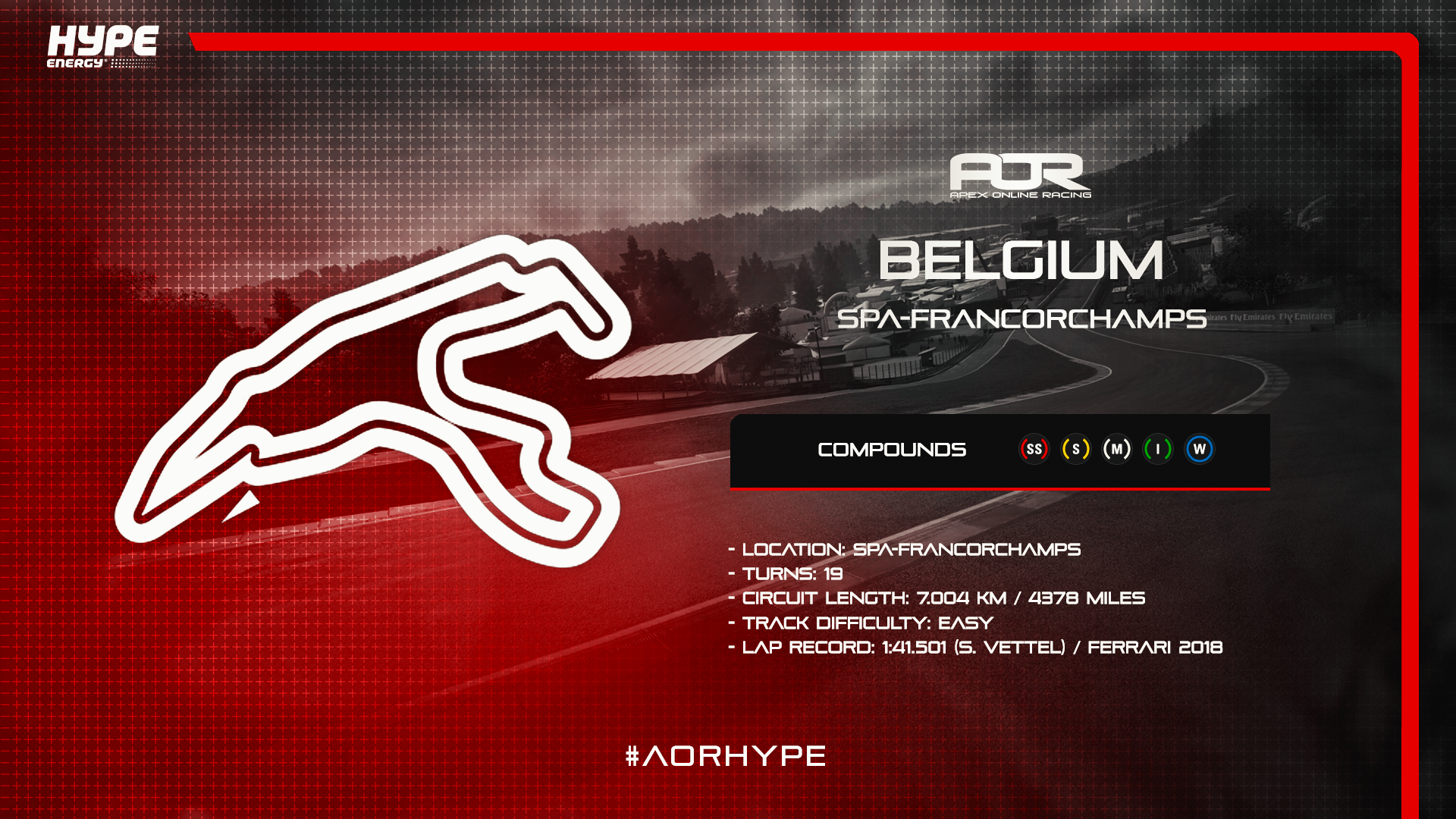 Better late than never am I right?
Reactions: xXVik-StarRxX and Hasnain

Race Report
Qualifying - P14
It was an average lap, was improving on my last lap but touched the grass at the bus stop and locked up which meant I didn't improve.

Race - P7
Decided to try something different and start on mediums and try and keep up with slipstream for as long as possible. But then on lap 2, I almost had a monster crash with Keezer before Blanchimont, luckily managed to save it but this cost me DRS for the rest of the stint. I pitted on lap 11 as I didn't feel like waiting to go onto supers and managed to jump more people than I expected. I came out just ahead of Frandy who let me go so thanks for that. I then caught up to Schnixel and had a small battle with him though it probably took a lap too long to get past. After that oo7 came out ahead of me but I just couldn't get within DRS range for most of the stint and in the end I only managed to get him on penalties. Was good to have a relatively clean race after the last 2 and this was actually my best result at Spa in the 6 league races I've done here (Edit: finished 6th in ERL F2 S3 so scratch that) so relatively pleased with that, I'm really not that good around here. Congrats to @xXVik-StarRxX on the grand slam, well done to @Jordy Lopez on P2 and nice to see @SlimboDude back on the podium.


Edited this one on my laptop, made me realise how much of a blessing ShareFactory is, took ages to render and upload.
Last edited: Jan 22, 2019
Reactions: xXVik-StarRxX
J

Qualy: Not entirely happy with my qualy as I feel I should've been able to hit a high 41, but didn't really hook a lap together despite 6 go's at it in total, so it was P7 on the grid with a 42.1.

Race: Gained a position at the start and then another as Pedro went off at Eau Rouge, got pretty close to going into the back of him and had to lift off a bit but luckily I think everyone behind did as well so nobody got the run on me through Kemmel straight. Got a run on Eren on the outside into the bus stop but just went too deep on the brakes with a double lock-up and a big slide so had to settle in behind again. Was a bit all over the place at the bus stop chicane in particular, probabaly holding up people behind a bit at the start. On lap 3 my wheel decided to press all the buttons on it, pausing the game and putting me in the share-screen. That didn't really cost me time or places since I got back on quickly but unfortunately it resulted in the "wheel-rotation"-glitch where my rotation was suddenly 900+degrees. Schumacher and Pedro were right up my gearbox so had to take the run-off area and let them go at T1, and since everyone was so close behind decided to let the little train past before pausing the game and recalibrating the wheel to avoid causing an incident.

So lost some time and places on that but the upside I suppose was that I got to drive in clean air and get into a rhytm. Pitted to the mediums early and my pace on that stint felt pretty strong, had some battles with Schnixel & Keezer and got past them eventually, and managed to sweat out of Keezer's DRS-range once he got caught up by professional battling. Got some "free" positions as well through DNFs from Pedro & Hiippari and the guys on alternate strategies pitting so P5 was probably the best I could hope for in the end. Pretty big gaps forward from there and I wasn't making a dent in it either. Need to stop dropping points to Vik and Jordy to keep up in the championship though! Vik's pace around Belgium was sensational though, both in qualy and in the race so gg to him.
Reactions: xXVik-StarRxX and Hasnain

Race report:
I couldnt even switch on the Ps4 this week, so I had 0 practice going into this race, so I logged in a little bit earlier to try a setup and a few tt laps. I knew I could do a good qualifying time because I have always been fast on this track and so I did with a P4 result. However, during the race, lack of practice started to show as I was losing the car in Eau Rouge every single lap. Therefore, I started to lose some places. After the pitstop I kept on losing the car (I dont know how I did not retire form that one) and well, on lap 19 or something I ridiculously hit the wall and had to retire when I was P9.
Looking forward to Monza, I like the track and with practice I know I can get a good result
M

They say third time lucky, unfortunately it was the opposite for me as I managed to screw up my third qualifying session in a row in appalling fashion. Bitterly disappointed with tonight’s race and performance. In qualifying, I lost it after the first sector, which was a purple split. In fact, my first and third sectors combined 29.463 + 27.794 = 57.257 were 0.016 slower than the pole lap first and third sector, 29.530 + 27.711 = 57.241. This being despite not pushing on the final sector because I knew the lap had gone, and with it a chance of a top three finish.

I put a few hours practice into tonight’s race over the course of the week because I knew I’d be missing Italy and Singapore, and was hoping for a good result to leave on. I haven’t decided on whether I’m going to sweat for Russia yet. The smallest of incidents can wash away hours of practice.