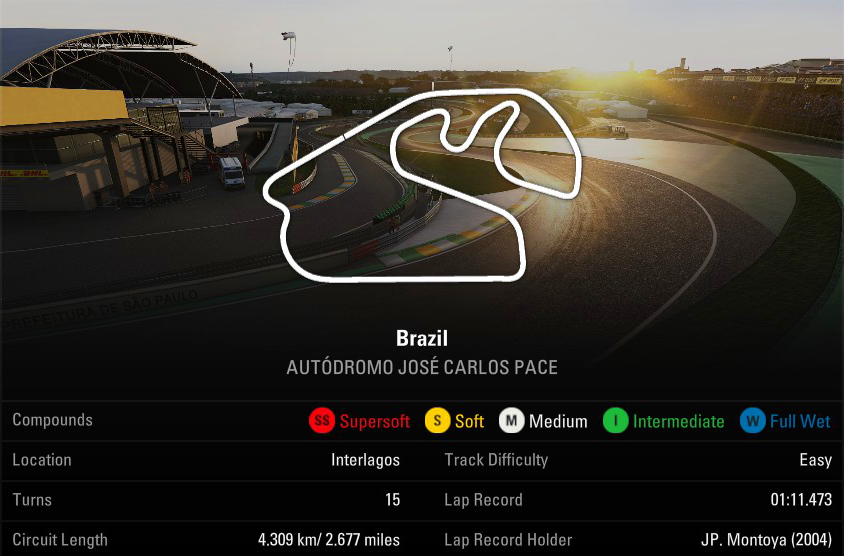 I can't attend this race I won't be home that day.
S

Well. That was interesting. I had quite perfect lap at quali, but then spun at final corner. My qualis have been so awful p14 at start.
Race was fun. Decieded to do 2stop in the end and I think that it did pay off. I had couple of problems tho.
1) I forgot to add fuel, so I had to save it couple of times.
2) I did not know that I had only one set of super softs. I realized it too late and definently lost some time due to that. I think that S-SS-S still worked quite well even tho @ENiGMA beat me with his 1stop strategy. (We were very close to each other until pit stops)

Due to other having bad luck and my reasonable pace, I finished P6 (again..). I think that it is quite decent, concidering I started second to last. Had chance to P5, but got my third warning on lap 34/36.
Last edited: Mar 12, 2018
Reactions: Ake

Well that was a fun first lap. Lost a part of my front wing into turn 4 in a fight between 4th and 6th. Then my awesome pit crew didn't change my wing and I had to pit again on the following lap. Kinda disappointed as I felt I had the pace to fight for at least a podium

74 % tire wear and a puncture it's a little bit too early I guess... Really disappointed...

Well that was an amazing start to my race after Qualifying in 13th driving in 7th place right behind 5th and 6th in the first stint on Softs with them being on Super Softs.

Was about to go for an overtake on 6th but then Pulse's lagg car broke my front wing and that was end of race for me. happy to still get points but there was definitely more in the pockets if that didn't happen.

Failed 2 times at the Senna S but still would win the race if Foton could not crash into me and broke my front wing in the penultimate lap.Very very angry to be honest, 22 points disadvantage hoping to be the champion.

@sitya Not loosing any words about punting me off the track going through turn 4? :/
S

N1kmido said:
@sitya Not loosing any words about punting me off the track going through turn 4? :/
Click to expand...

I put You off? Dont make me laughing dude. You turned into me like I am not next You

On my screen you just didn´t turn it all although I left a lot of room. I have no recording so I can´t do anything about it anyway. If it was lag, fair enough - If not I´d recommend a more appropiate tone *dude*
S

N1kmido said:
On my screen you just didn´t turn it all although I left a lot of room. I have no recording so I can´t do anything about it anyway. If it was lag, fair enough - If not I´d recommend a more appropiate tone *dude*
Click to expand...

I think we are not talking about the same thing, before the turn we had already Made a contact that Made my car uncontrolable so I was just a passanger in my car and while this I was sliding into You.

I had my unluckiest last 3 races in my history of league racing. This race was the worst of all, when @N1kmido and @sitya collided N1k's car was ond the middle of the track and i had no room to pass him so i ran into his car and i lost my wing. I came into the pits and changed onto mediums to bring it home but it was not the case, on lap 34 my tyres were like 77%-iss, and i pitted for SS and i got a 5 sec stop and go.......it doesn't get any worst than this really. At least i got the fastest lap I'm hoping for a good race in AbuDhabi, i want to end it on a high Cya there.
Last edited: Mar 13, 2018
You must log in or register to reply here.
Share:
Facebook Twitter Reddit Pinterest Tumblr WhatsApp Email Link
Top Bottom