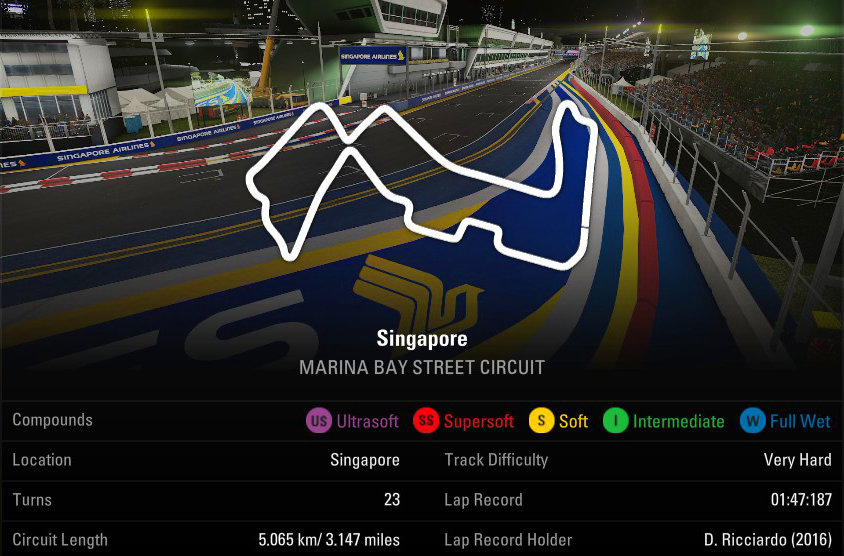 Singapore GP
Qualifying : 8th
I'm fairly slow, but street circuits make it worse, just cannot find confidence to attack each corner
Race : 8th
An okay start, just want to protect my front wing at lap 1, brake a bit early for each corner, so sorry if anyone behind me get caught. Throughout the race, i broke my front wing twice plus pit for intermediate make it a 3 stop. At that point already a lap down, so i just want to finish the race. With unfortunate event of others, i end up finishing 8th, well I'll gladly take 4 point.

Well well well, what can I say

Race : 7th
An awful race by me. Six pitstops, a lap down. Had no setup and no qualifying. Went from 13th to 8th in Lap 1, but got wing damage. Pitcrew didn't change it in 2 pitstops, which is stupid but I was within a couple tenths of the front so it's definitely what could've been.

Race : 1st
Eventful grand prix! Singapore always throws something up random. Tucked in behind @Maznat87 at the start, we had a good battle in the opening laps, good fair racing from him.
I was able to close the gap a little to @Dubzzy__, I wasn't aware of the rain until after the first pitstop! I thought I had made an error putting on the softs, on my outlap I tagged @bananajosh1 at the swing bridge when I was lapping him, I thought he was moving over for me but there was a misunderstanding. I damaged my front wing and the understeer was hideous. It allowed @iContrast to close up and he put me under some serious pressure for the next 10 laps or so. Another fun battle. I was fortunate that the timing of the rain forced Dubzzy to pit for the intermediates, and after the guys behind me tangled it took the pressure off me.

I probably should have fixed the wing with hindsight, I came in probably 2 laps too early for the intermediates. Just focused on bringing the car home, when unbelievably, coming out of the penultimate corner on my final lap, my Ps4 froze...I stared at the screen in horror, akin to many last lap failures. I think it might have been to to with the way my recording settings were set, as I could not find the clip after this screen freeze. Luckily, the ai car did enough to bring the car round the last the corner, and just about kept my nose ahead of Dubzzy for the win.

It was a race with ups and downs, when my nose was clean my race pace was encouraging and it wasnt a dramatic drop off with the broken wing. Comisserations to Dubzzy, he had an unfortunate race and was probably the quickest guy there today, nonetheless, collecting the points matters for your championship crusade. Well done to @mljh9999 for making it to the podium, and a mention to @InfiniteMarch96 for bringing the car home after his unfortunate connection issues of the first few races.

You don't have to be the out and out fastest to do well, consistency is important at street circuits, throw in a dash of rain and with a bit of luck anything can happen.
Last edited: Jan 28, 2018
Reactions: Dubzzy__, InfiniteMarch96 and Maznat87

Friends from across the globe, was PSN fine for you guys when you raced?

DON SILVA said:
Friends from across the globe, was PSN fine for you guys when you raced?
Click to expand...

At the time we race, yes. Its working normally. Is PSN down again?

InfiniteMarch96 said:
At the time we race, yes. Its working normally. Is PSN down again?
Click to expand...

We've had to postpone our races. PSN is broken