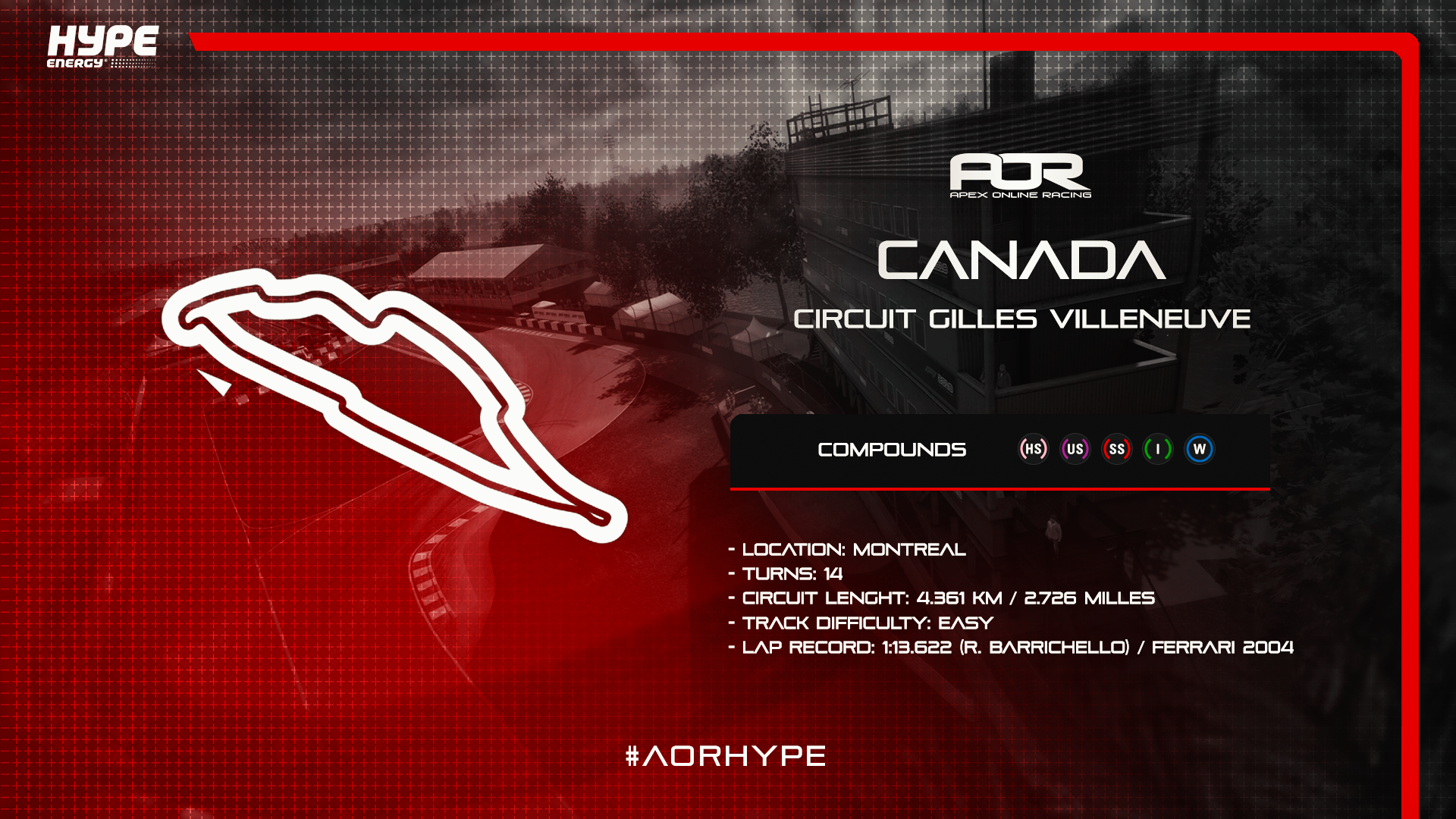 I really like Canada. It's always fun to drive around Canada although the last chicane is kind of a joke in this game. The track requires controlling traction which usually plays to my strengths as a driver. That said, I am using a new pad as my old one has become increasingly unreliable and barely functions at all in any other games. This means I have to do extra practice and get used to the new throttle/brake deadzones/saturations.

Other than that, I know I have some pace around here because I won a domestic league race around a month ago so I'm expecting a good race. Also, surely some rain has to come soon as it's been dry the whole season.

This is one of those tracks where I struggle on, I don’t feel comfortable with the car, so I’m gonna be off pace I think

Best track on,this game, on TT Canada sucks but online feels so smooth, after austria you can have a great flow around here. Looking forward

I´m sorry but it looks like I can´t race. My wheel made some weird noices today and all of the sudden I had to stear left to drive straight (feld like Seb in Hungary 2017 xD). I have to see if I can get it fixed otherwise I have to quit for this season unfortunately. Wish me the best of luck...
Reactions: Sean FAP Belkom and Casper24-F1

Vettel_Racer_5 said:
I´m sorry but it looks like I can´t race. My wheel made some weird noices today and all of the sudden I had to stear left to drive straight (feld like Seb in Hungary 2017 xD). I have to see if I can get it fixed otherwise I have to quit for this season unfortunately. Wish me the best of luck...
Click to expand...

Vettel_Racer_5 said:
I´m sorry but it looks like I can´t race. My wheel made some weird noices today and all of the sudden I had to stear left to drive straight (feld like Seb in Hungary 2017 xD). I have to see if I can get it fixed otherwise I have to quit for this season unfortunately. Wish me the best of luck...
Click to expand...

Just use your controller

leefindlay04 said:
Just use your controller
Click to expand...

Vettel_Racer_5 said:
If I wouldn´t be 20 seconds off the pace with the pad I would try it
Click to expand...

Haha, you gonna try and get your wheel fixed then?

Finally, some rain. Canada was an interesting challenge with many variables in play. Ultimately, I must be somewhat happy with my end result considering my complete lack of form in qualifying.

Speaking of which, it's fair to say I didn't have the best qualifying session. I had altered my setup slightly to accommodate for the full wet conditions in the race so I knew I wouldn't be as fast as I could be in the qualy session but I wasn't expecting to be that slow. Sure, I had two of runs invalidated in the last chicane but I wasn't exactly up on time that much that I could have improved my qualifying position drastically.

The race was to be a wet-to-inters-to-slicks which had me in a positive mood even after the terrible qualifying. I hadn't done any league races in wet conditions before in F1 2018 so I was salivating on the opportunity to finally find out how my pace was in the wet.

Start was incredibly tentative and surprisingly trouble-free, for which I have to thank everyone. It was really difficult to even see the corners with the amount of water being sprayed which was a unique challenge never seen before in my time as a league racer. As expected, the first few laps were a struggle as everyone was testing their limits and care had to be taken in every braking zone.

Slowly but surely, I made my way up the field with some timely overtakes. I also benefited from a few accidents in front of me while still continuing to battle for positions. All in all, I was pleased with my pace on the full wets. Eventually the conditions improved and inters were in order. That's when the progression stopped and I was more or less at the same pace as everyone else.

Finally there was a stint on the slicks and I was barely able to keep the pace up enough to hold position. In fact, I was battling with @VP_DamnDqniel in the last few laps of the race which was a great fight although it did cost of us both a little bit with the amount of penalties we had to take since we were pushing each other so much and the last chicane especially proved to be impossible to navigate side-by-side without getting penalties.

In the end I finished a fairly respectable P6 which is another result that feels like damage limitation. Qualifying remains an issue for me and it is something that must be fixed if I am to fight for race wins and podiums in the future.

Congrats to the winners as always. France is next which is another unknown quantity and it will be interesting to see who will come out on top. Cya there.
Reactions: VP_DamnDqniel and Casper24-F1

Quali: 3rd. Very dissapointed, couldve easily got pole but my brother decide to disturb me right when i go to the wall of champions and went wide at the final bit their and got invalidated. It was a 1:07.2 so Unlucky.

Race: 1st. Getaway was okay but the spray was fucking dreadful, couldnt see a thing. After 2 laps i was used to the conditions and ready to fight. A good move on cherry and i was 2nd. Then gaining on spider and a good move in the wall of champions and i was in the lead. From then on it was quiet cause i was pushing like mad to give me a confident gap for the changeable conditions.
Overall a very pleased results. France next, SHITE TRACK
Reactions: Tactician109

Qualifying was not too bad, given on how much I was struggling round that track, did a 1:07.7 which was one of my better laps round there.

I was extremely happy with that result, I had good pace in the full wet, fell backwards when it was drying out but I picked up no penalties which helped pick up a position. I good result was well needed after soms bad luck this season, hope to get another podium in France
Reactions: Tactician109
You must log in or register to reply here.
Share:
Facebook Twitter Reddit Pinterest Tumblr WhatsApp Email Link
Top Bottom