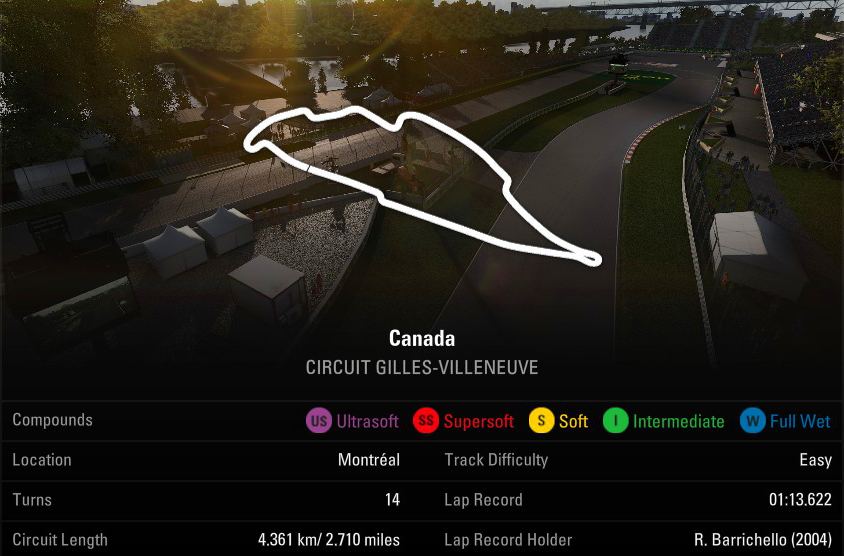 After Monaco I'm feeling a bit more confident about my pace, hopefully I can get into the points again
Reactions: Lamp and Jipper

Love this track, but so many opportunity’s to cut are there I really gotta stay with in the limits haha.

The question is... Can Lamp get more that 29 seconds in penalties on this track

Oh due to budget cuts there will not be any beer and back bacon at the hairpin this year, sorry.
Might try to get a Tim Hortons coffee and doughnut stand though.
Reactions: Jipper, ChokDK and TheVerenzak

Won't be racing tonight due to illness.
Reactions: TheVerenzak

Was hyped for my first race in a while, started up the pc and my wheel doesn’t even calibrate.. Gonna try to fix it but I’m not too hopeful...
Reactions: TheVerenzak
A

I'm afraid I have to drop out of this as well, tried waiting but this fever won't back down :dead:
Reactions: TheVerenzak

I need a new team mate I think.

Quali: Pretty good. P6 with just the one lap.

Race: Pretty dire. knocked around like a pinball at the start and then squeezed into the wall by VARD. continued for a bit before managing to lose it under braking and hit the pit entry (weird I know). Shame because this is one of my better tracks and I could have done well from 6th.

That was great fun!
In the end my raw pace wasn't too great, but I tried to make the best of it and 7th is a decent amount of points

Qualy: P9
Knew the rain was coming and we'd be racing in the rain later on in the race, so I just put on some pink boots put enough fuel in the car for about 3 laps and just did a few hotlaps. In the end, my last lap (when it started to rain ever so slightly) was the fastest. Could've been higher but unfortunately lost about 3 / 4 tenths in the last chicane, because I was quite careful as I didn't want to cut it and invalidate my lap.
In the end these 3 tenths could have put me about 4 places higher on the grid, but oh well.

Race: 7th
The rain made it really tricky and my set-up wasn't really the best for the conditions so I was having quite some trouble keeping the car on track and in a straight line.
Had great fun battling a couple of you. At the start I had a nice little battle with @VARD (eventhough he was clearly faster and I was just holding him up )
And later on with a few others (@Cheeese, @TwoFiftySix) - they were both also faster than me so it was quite tricky keeping them behind me.
Last couple of laps I had a good ol' train behind me, with @R.A.J. keeping the back of my neck warm and @Ronnin1978 and @Cheeese right behind him as well.
Due to penalties I unfortunately lost out to both R.A.J. and Ronnin but oh well, at least I finished ahead of them on track!

In the end, had a fun exciting race and 6 points ain't bad at all
Reactions: Ronnin1978 and R.A.J.

@ApplePhysics
I really sorry if I squeezed you in that corner.
From my POV you wasn't even next to me, more like behind. Also I was understeering a bit but i think that wasn't affecting my racing line. Again, I am sorry if that happened like you sad, and I hope you can accept my apologies.
Reactions: ApplePhysics

My first front row Qually of the season, could have gone faster on my time but perhaps not faster than the pole 1:11:111, but unfortunately it started raining so i will never know! but was still pretty happy,

The race start off the line was a little sketchy and was fighting with @Niek van Gelder for the 1st 2 laps, unfortunately i took some front wing damage at the hairpin end of lap 2, i was running in 3rd after this, Felt like i still had good pace, but not as much as i could have had, but the biggest problem was consistency, it was impossible to be consistent in the wet with the damage, so i was dropping back slowly from the 2 front runners and ended up playing a good game of Cat and Mouse with @[email protected] where he eventually passed me on lap 12,

From here i basically ran my own race trying to keep up with the guys ahead, there was no real challenge from behind as i still had enough pace to keep going after @[email protected] had passed so i felt i had 4th in the bag, I decided not to repair my front wing on my pit stop for the 2nd set of Inters, so i could maintain track position of 4th,

Half way through the second stint disaster had struck @Niek van Gelder and his steam disconnected, he was able to rejoin the race but the AI had pitted him or had a drive through penalty as he didnt change tyres. this put me in contention for stealing 3rd! which after a good aggressive but fair battle with a few heart stopping moments due to connection symbol on @Niek van Gelder Teleporting around I managed to take, and build a small gap, by this point i knew i had 9 seconds worth of penalties so i had to push to not lose the position, at which point within the last 5 laps or so @schumizeu was disqualified from the race... Im not really sure why, i can only assume too many corner cuts, so this handed me 2nd, now i really had to put the gas on to maintain my position which thankfully i did.

Enjoyable race even with the damage slowing my pace. and congrats to @[email protected] for getting another win!

VARD said:
@ApplePhysics
I really sorry if I squeezed you in that corner.
From my POV you wasn't even next to me, more like behind. Also I was understeering a bit but i think that wasn't affecting my racing line. Again, I am sorry if that happened like you sad, and I hope you can accept my apologies.
Click to expand...

Yeah don't worry about it! From what you say it sounds like connection might have been an issue, as well!

Started out with an average lap in qualifying but didn't expect it to rain, could have improved by a few tenths. Race start was tricky, I found it really hard to find grip in the first few laps. ON lap 2, I spun and lost my front wing, this wasn't too bad as I felt that I could recover and get some good points. With 3 laps to go, I decided to go for fastest lap, I was improving on my own personal best by 4 tenths when I went too deep into the last corner and hit the wall and lost a tyre. I was really annoyed as it was at such a low speed that I felt that I could get away with minor damage and there were only 2 laps to go, not sure if I still get the points or not but it was only 1 point so i'm not really bothered if I don't get rewarded points from this race. My POV is below:

Q 12
R 5
Qualy
Would rather forget it as a matter of fact deleted from the stream record never to be seen again.

Race
Bit of a scary start I think @James Thorpe (AOR James) was still enjoying the Tim Horton's coffee and doughnuts at the start as he didn't move and with the wall to one side and speeding cars to the other all I could do was hit the brakes. Luckily I ghosted when I stopped so @Cheeese could go through me. Once we got going I was down to 14th.
Made my way back up albeit by others misfortune. Just drove as steady as I could in the rain, second stint though had a slow tap into the wall after an oversteer moment in the last chicane and got orange wing which I promptly forgot about. Was told afterward by someone who was watching the stream I should have changed it as I was losing a second a lap that and losing 8 seconds on the spin might of got higher but oh well.
It was more fun chasing down and not quite catching @TheVerenzak as well as with the lack of grip sometimes letting @Ronnin1978 get close but still had enough traction out of the hairpin to keep him behind.
Finished 7th but got 5th via penalties, and with @VARD getting 4th it was a good points day for Ferrari.

This game sucks...The car is Undriveble on the rain...or very hard to maintain... changing weather??? what changing during 30 laps? light rain...sucks, no changing...
There are still bugs with SC on multiplayer lobby?
I've touched the wall very little with right rear and boom... your car had terminal damage.
WTF is this?
Now i'm looking for Azerbaidjan race...and i hope i will do something better on this hard track....
Reactions: TheVerenzak

Andrei Ivan said:
This game sucks...The car is Undriveble on the rain...or very hard to maintain... changing weather??? what changing during 30 laps? light rain...sucks, no changing...
There are still bugs with SC on multiplayer lobby?
I've touched the wall very little with right rear and boom... your car had terminal damage.
WTF is this?
Now i'm looking for Azerbaidjan race...and i hope i will do something better on this hard track....
Click to expand...

This game is a piece of sh*t indeed. It's something we unfortunately can't change, and just have to deal with, I guess.
Seems like Codemasters still can't make a proper game with working SC, good netcode and proper damage models after 8 or so years. Luckily, they'll basically have to fix these problems for the eSports events they want to host in the future.

We're still checking the Safety Car, but for now it's still too glitchy and I'm not sure if Codemaster is going to release another patch to fix it. So hopefully, and I'm definitely not promising anything, it's good and stable enough so we can atleast turn it on for Season 15. I don't expect it to be working before the end of this season though, which is a shame.

I have to say that this game is far better at driving in the rain than F1 2016 was tho, atleast you can feel some level of grip now, in 2016 it was just pure ice.

Perhaps you could look at choosing a setup for more rain based races, or even drop the Diff to 50% to help with traction in the rain, there is plenty of things you can do to make driving in the rain easier.
Reactions: Andrei Ivan and TheVerenzak
You must log in or register to reply here.
Share:
Facebook Twitter Reddit Pinterest Tumblr WhatsApp Email Link
Top Bottom