Moved Spun on the Final Lap

Platform + League: XB1 F3
League Coordinator: @Germo
Date: 5/4/20
Members Involved: Myself, @AOR Shemile
Description: We're side by side into the braking zone of lesmo 1 and I get spun, and having seen both POV's my main issue with his move is he pretty much just takes the racing line (until he understeers wide) ignoring the fact I'm on his inside so I don't think there was enough space when we make contact. With how pens are given I doubt it will make any difference as I wasn't damaged even though I lost more than 5s in time, but I just want a definitive answer as to whether he was at fault or if it was a racing incident as I can see the argument for both.
Evidence: My POV, starts at 1:27 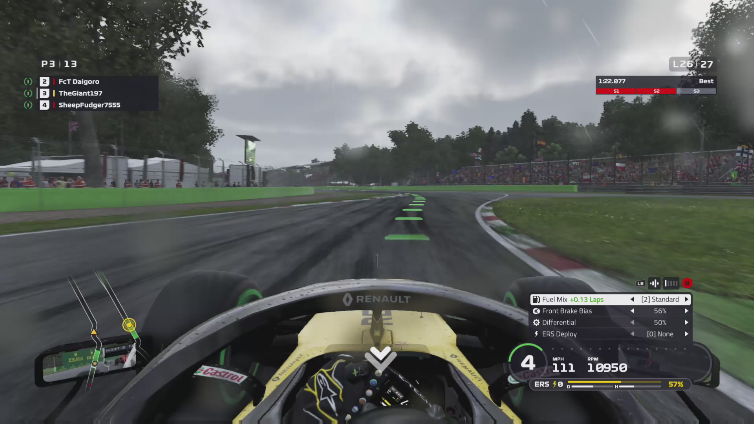 Also this is a screenshot of us moments before contact, I'm making the apex and we were side by side going into the corner so it's just looks like he was trying to force his way past

Most the guys in the chat have the same view here. I've left space on the inside. If I turn in any later I crash and that's it. He did the same thing to me the lap before at Ascari and I backed out, also at the chicane, if he didnt cut the corner he wouldn't have been side by side with me and the contact would've been avoided. My POV will show how I do leave space and the inside and had nowhere else to go...

With ascari, you kind of have a point, but I would say being on the outside and always ahead even if just by a nose meant I had no reason to back out, so I did my best to leave as much space as I could if you chose to go for the move there.
With T1, you do the same thing as lesmo 1, you try and just take the racing line and hit me, but this time it was wheel to wheel so I lose grip and have to catch the car, but was able to hold it.
The best point you have is the chicane before, my defence on that is that I've committed to the outside, where in hindsight I should have backed out before the corner, but I didn't have to, and it results in a touch before you're fully ahead which altered my line and I couldn't react in time to back out, so I tried to make the corner the best I could but obviously there wasn't much space

On both parts it wasn't the cleanest of driving, but we were able to keep both cars pointing forward so up to that point it was okay, but at lesmo 1, you're just too aggressive with the angle you take for the corner as it cuts me off whilst I'm still there and I end up having nowhere to go

I don't think i was aggressive at all. I turned in when i had to, whilst leaving space and you understeered into me. Nothing else i could've done apart from leave you space here which i did. Racing incident imo, you did the same to me but i backed out, but when it came to you, you caused a collision instead of avoiding one...
T

I do nothing wrong at ascari, I give you as much space as allows at ascari, I compromise my line, missing the apex, so you had the option to go for the move or back out at any point throughout the whole corner, but at lesmo 1 I don't get that luxury. Like at ascari the car on the inside is partly alongside but further back under braking, and instead of compromising your line a bit more to avoid contact because you haven't fully got ahead under braking, you take the racing line on entry so I got squeezed with nowhere to go and you hit me as a result, it definitely wasn't me understeering into you as I didn't understeer.

I'll also bring up T1 again, we're side by side under braking, yet you turn in before the racing line, you'd have forced me off the track if the contact didn't cause me to slide into the apex, where was I supposed to go there?

I wasn't sure if it was your fault to begin with but the more I've looked into it the more I think it's your fault and not a racing incident, and the only thing against me is the corner cut at the previous corner. I've put my thoughts on that and if that's the reason it results in NFA then fair enough, but regardless please just leave a bit more space in battles, it's not quali/TT

Moved to the stewards

The stewards have looked through the evidence and comments put forward and have come to the following conclusion.

From looking at the footage it is clear to see that @AOR Shemile gives enough room to @TheGiant19.

Therefore we have decided that No Further Action will be taken.